How To Date Zombies – A Valentine’s Day Special Post 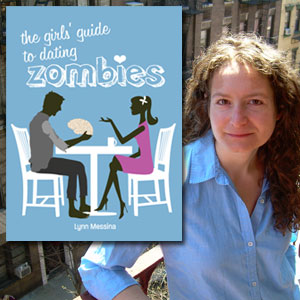 If all the men in the world turned into zombies, how would a girl go about improving her love life? Heck, what would she do on Valentines Day!?

Well, Hattie Cross, the protagonist of Lynn Messina’s new book within a book, The Girl’s Guide to Dating Zombies, has an answer: date zombies!

Now, I don’t know about you, but the idea of dating someone who really only wants to eat my brains doesn’t strike me as a good one. Besides, what about the whole rotting flesh issue? Ewww.

But apparently, dating a zombie has its perks. “According to Hattie,” says Messina, “it’s a toss-up between total career support — a zombie will never feel threatened by your job or how much money you make or complain if you cancel plans to work late — and never again having to wait by the phone for a guy to call.”

Boy, I know how that feels!

OK, so a zombie is probably a pretty stable date … if nothing else, he’ll be single minded. But what would possess an author to write a book about it? Lucky for you, Messina had some answers to share.

The Genre Traveler: What inspired you to write The Girls’ Guide To Dating Zombies?

Lynn Messina: Right after Little Vampire Women came out, I was having lunch with a magazine editor and we got onto the zombie trend, which I said had pretty much run its course. My friend countered with a seemingly endless list of zombie projects in the works — Walking Dead, World War Z, another Zombieland movie, on and on. So I started to think about zombies and what I could bring to the trend, what kind of personalized spin I could give it. Naturally, my thoughts turned to chick lit.

And then it hit me: an old-school chick lit dating saga with zombies as the romantic leads. It was completely absurd, which is why I loved it. When I started writing Little Vampire Women, I couldn’t imagine anything more absurd than turning the March girls into vampires, but the deeper I got into the story, the less crazy it seemed. By the end, I was convinced the March girls had been vampires all along; we simply didn’t realize it. So in many ways, The Girls’ Guide To Dating Zombies is my attempt at topping Little Vampire Women.

TGT: Speaking of the zombie trend, I’ve had this conversation with several guests on my podcast. Where do you see it going next?

LM: To be honest, I’m a little worried some people are going to point to The Girls’ Guide To Dating Zombies as the end of line for zombies. “Zombie boyfriends? OK, the zombie has officially jumped the shark.” But I like to think this book is just the beginning of a new, romantic direction for zombies. We’ve done scary and grotesque. I couldn’t watch The Walking Dead because the zombies were too unremittingly repellent. Looking at them, you could practically feel their molted flesh sliding off their boners like soggy bacon. My zombies are more like Night of the Living Dead zombies –regular folks with oatmeal on their faces. Those kind of zombies can go anywhere and do anything.

TGT: OK. Given the key point that zombies are basically reanimated and decaying corpses, what, for you, was the hardest part of making zombies date material?

LM: The sex scene, of course. Zombies are, by all accounts, unrelentingly stinky blobs of rotting flesh that — unlike, say, the noble vampire who resembles a regular human for the vast majority of time. So the biggest challenge was figuring out how to make a nonsquidgy, nonrancid, nonputrid zombie that a human female wouldn’t be entirely repulsed to touch — and to do so without creating an implausible zombie-lite version.

After several nonstarts, I finally came up with a viable solution: treat the zombie as if it were just another human being with a crippling mental condition. Zombified neurological decay is simply another type of chemical imbalance in the brain. The right regimen of zombaceuticals can not only control appetite and modify behavior but it can minimize odor, slow down decay and firm up a zombie’s skin so that the thought of zombie sex isn’t one hundred percent disgusting.

TGT: Let’s talk about the book as a whole. You’re calling this book zombie chick lit. Why?

LM: If Pride and Prejudice was indeed the first chick lit novel, then Pride and Prejudice and Zombies was the first zombie chick lit novel. The Girl’s Guide to Dating Zombies simply picks up where Seth Grahame-Smith left off — mining the comedy inherent in the marriage of zombies and women’s fiction. And, trust me, there is a lot of comedy to be mined. I owe Grahame-Smith a lot for showing me the way.

TGT: Your protagonist, Hattie Cross wrote a book called The Girls’ Guide to Dating Zombies, and chapters from her book are excerpted in yours. What was your process for writing these fake chapters?

LM: The first thing I had to do is figure out what I wanted to say in these chapters. I identified basic topics that needed to be covered: how to meet a zombie, how to communicate with a zombie and, of course, how to have sex with a zombie. Then I had to make each chapter relate to the narrative that immediately followed. So the chapter on how to meet a zombie (“Chapter 13: Let’s Get It On — Everything You Always Wanted to Know About Zombie Sex But Were Too Grossed Out to Ask”) immediately precedes the scene in which Hattie and her new zombie boyfriend consummate their relationship.

Once I sorted that out, the fun began because I had a total blast writing in fake-advice-column style. I work in women’s magazines, so I know the tone very well and how to mix it up — one chapter is a quiz, another is a chart, a third is a list of misconceptions. The absolute best part was poking fun at guys and relationships by exploring all the ways a relationship with a zombie resembles a relationship with a man.

As the author of The Girls’ Guide, Hattie Cross is a zombie apologist, and she constantly takes little digs at human men, implying that zombies aren’t that much worse. For example, she concedes that, no, your zombie boyfriend won’t notice your fabulous new do, but, she points out, when was the last time your human boyfriend noticed you got your hair cut? At one point, she even implies that dating a zombie is better than dating a man. 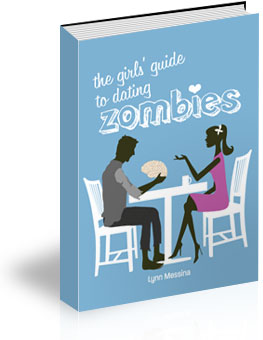 The Girls’ Guide To Dating Zombies is available in paperback from both Amazon and Barnes & Noble, as well as in both Kindle and Nook editions.

Get The Girls’ Guide to Dating Zombies on Amazon or Barnes & Noble – you know you want to!

And please vote for The Genre Traveler blog in the traffic-breaker poll for this tour. The blogger with the most votes wins a free promotional twitterview and a special winner’s badge. I want that winner to be me! You can vote in the poll by visiting the official Girls’ Guide to Dating Zombies blog tour page and scrolling all the way to the bottom.

Be sure to enter for your chance to win an autographed copy of The Girls’ Guide to Dating Zombies: ENTER HERE.

Check out this amazing book trailer!

Lynn Messina is the author of six novels, including Little Vampire Women and Fashionistas, which has been translated into 15 languages and is in development as a feature film. She attended Washington University in St. Louis where she studied English Literature. Her writing has also appeared in Self and Modern Bride, among other publications. She lives in New York City with her husband and sons. Connect with Lynn on her website, blog, Twitter or GoodReads.

Join us for a live twitterview with the author on Saturday, March 10th at 4pm EST. Search #emlyn on Twitter, and bring your questions for this lively chat.