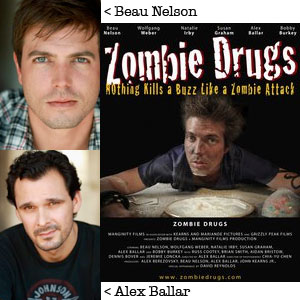 This week, Beau Nelson and Alex Ballar, the filmmakers behind the indie comedy horror movie Zombie Drugs, join The Genre Traveler to chat about the film and its commentary on drug culture. The conversation also touches upon using zombies as a metaphor, working with zombies on set (they’re tough), zombies vs. vampires, the potential for zombies to evolve into romantic or heroic leading roles, favorite zombie and horror films and how they got to the point of making the film.

NOTE: Due to editing out some technical issues and a barking dog, this episode is a little shorter than usual.

Marianne Parise
Marianne was the key makeup artist for Zombie Drugs, creating the look and feel of the zombies in the film. She also worked on The Hog, another horror film.

The Zombie Hero
Now undead and on the run, Mike has a chance to become more than he ever was! A sequel is now in the works.

For more information about Beau, Alex or Zombie Drugs: