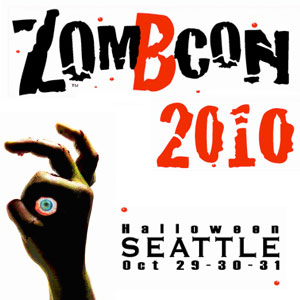 O.K. I think it is clear now that zombies are staging a coup to take over the spot of ranking ghoulie. For me, it started with a slow trickle of books to review. First it was The Complete Idiot’s Guide to Zombies, then it was The Art of Zombie Warfare, then Night of the Living Dead: Behind the Scenes of the Most Terrifying Zombie Movie Ever, with whom I will be doing a podcast episode!

Of course, with the latest installment of Resident Evil now playing in the theaters, it kind of makes sense that other zombie products will try to take advantage of the increased zombie awareness.

But then, yesterday, in my email I got an announcement for ZomBcom International 2010, the world’s first-ever zombie culture convention.

Wow. A convention dedicated to zombies in all their incarnations. Even vampires don’t have that … yes, there are vampire conventions, but they usually focus on a particular movie or television series. (I’m just sayin’.)

Nope. But zombies have now shuffled onto the national stage, and if you’d like to participate, put this down on your calendar for Halloween weekend.

ZomBcon, which will be held in Seattle, features a tribute to George A. Romero, along with a 25th anniversary gala screening of Day of the Dead, Romero’s second full-on zombie film, as well as the standard discussion panels, workshops and other fun stuff.

Celebrities in attendance include: