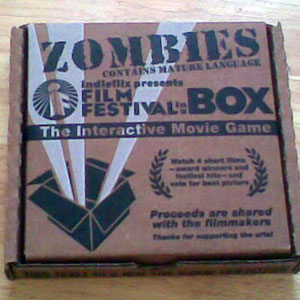 Back in October or November, right about the time of ZomBcom, IndiFlix sent me a copy of their Zombie Film Festival in a Box. It is one of a line of interactive movie games they have that feature short independent films focused on some central theme … in this case zombies.

It took me awhile to check it our for several reasons:

It took me awhile to gather a group of folks to watch it with me … this is a party game, so watching it by myself would have been plain sad. (And, I’ll admit, I was a little scared.) The gathering happened sometime in July, I believe, and the box has been sitting on my desk waiting for me to review.

So, at long last, here are my thoughts.

These films were really good and not as scary as I thought they would be … which is a good thing. There was some talented scriptwriting and decent to almost sublime acting. If this is an example of the caliber of films they usually include in their games, I’d love to check out more!

The point of the game is to pretend you and your guests are judges at a mini film festival. You vote on best film, best actor, etc. and record your votes on the IndieFlix website, where you can take quizzes about the films you just saw and compare your votes to those of others. The films can also spark interesting conversation.

The overall consensus of the group I gathered was that the films were entertaining and provoked some interesting conversation.

The downside, really, was the topic for us. None of us were zombie enthusiasts, so we were all pretty luke-warm about this particular festival.

When the idea of reviewing this was pitched to me, I was told I could select which one I wanted. I chose the science fiction one, so was surprised when the zombie festival showed up.

But I do what I say I’m going to do, so I did watch it and review it. And, to my surprise, I actually enjoyed the experience.

There were four short films on the DVD: three serious and one comedic. This made it a little tough to select a best film because it was like comparing three apples to one orange. Which do you choose? The best apple or the orange you really liked, too?

I guess the bottom line of this review is would I recommend IndieFlix Film Festival in a Box? My answer is a reserved yes. This is the kind of game that you need the right audience for. So you only want to play it with fellow film buffs. Also, select your topic wisely so that it also fits the interests of the group.

The other downside for me is the price. Each festival retails for around $18. I personally think this is a little hefty for what you get. A two-hour film retails for between $15 and $20 … with the Film Festival in a Box you usually get about half that time (28-55 minutes). In the past, I have purchased a movie magazine … a DVD with a selection of 11 short films and additional content … for around $15 (more content, less money). I would be more inclined to get more Film Festivals in a Box if they were priced between $10 and $15.

Of course, the price probably includes the charity aspect: When you buy a DVD from IndieFlix, you are directly supporting the cast and crew of every film on the disc. So it’s all how you look at it.

For more information, or to get your own Film Festival in a Box, go to indieflix.com/film-festival-in-a-box.

What You Get
Click on the images to see a larger view.