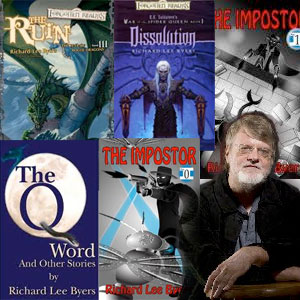 Today I chat with Richard Lee Byers, the author of more than 30 fantasy and horror novels, including some set in the Forgotten Realms universe. Our discussion touches on writing in your own world vs. writing in someone else’s, Dungeons & Dragons, how he got started writing in Forgotten Realms, his new book, The Imposter, post-apocalyptic stories, fencing, the type of horror he writes, self-publishing, the difference between Dragon Lance and Forgotten Realms, and more.

Dungeons & Dragons
This fantasy role-playing game was first published in 1974 by Tactical Studies Rules, Inc. (TSR). It has been published by Wizards of the Coast ins 1997. It is an offspring of miniature wargames and its creation is regarded as the beginning of the modern role-playing game industry.

In addition to its fantasy setting, what sets D&D from traditional wargaming is that each player is assigned a specific character to play, instead of a military formation. The success of D&D lead to many copycats and related products, such as a magazine, animated TV series, film series, novels and computer games.

The Book of Eli
Denzel Washington (Virtuosity, Fallen, Deja Vu) stars as Eli in this 2010 post-apocalyptic film directed by the Hughes brothers. As Eli travels west across the United States with a mysterious book that God told him to deliver to a safe location, he comes across Carnegie, played by Gary Oldman (Harry Potter films, Lost in Space, The Fifth Element), a dictator in the making who is seeking this book. Carnegie believes it holds the power to give him dominion over people. Mila Kunis (Piranha, Max Payne, American Psycho 2), Ray Stevenson (Outpost, The Vampire’s Assistant, Thor) and Jennifer Beals (Vampire’s Kiss, The Prophecy II, The Grudge 2) were also in the film.

Kamikaze
The Kamikaze were aerial suicide attacks by Japanese pilots against Allied naval vessels during World War II. Designed to destroy warships, the attacks were basically a pilot crashing their plane into the enemy ship. To make sure the resulting explosion was effective, these planes were often filled with explosives, bombs, full fuel tanks and other highly combustible materials. Although “kamikaze” usually refers to aerial attacks, it is sometimes used to refer to other types of suicide attacks, as well, such as those using submarines, speedboats, divers and people.

Argosy
Argosy is generally considered to be the first American pulp magazine and began as a general information magazine targeted to boys adventure market. It first started publishing in 1882 under the name The Golden Argosy and changed its name to The Argosy in 1888. This coincided with a switch to pulp fiction. The magazine went through several name changes as it merged with other magazines, and during its original 96-year run published a range of genre fiction including science fiction and westerns. Argosy was briefly revived from 1990 to 1994, and again in 2004, 2005 and 2006.

Weird Tales
Weird Tales first started publishing fantasy and horror fiction in 1923. Its first run ended in 1954, but has since been revived. It was one of the original pulp magazines of the Golden Age of Science Fiction, often considered to have spanned the 1930s and 1940s.

2 comments on “Podcast Episode 49: Going with the Marketing Flow”