Podcast Episode 50: The Intersection of Horror and Religion 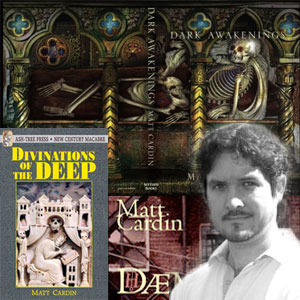 The Genre Traveler Celebrates One Year of Podcasting!

This week I chat with Matt Cardin about religion and horror. Along the way our conversation touches on the role religious motifs play in the horror genre, the nature of horror vs. fear, the connection between religious experience and fear, gnosticism, the evolution of religious beliefs, the push and pull of spiritual concepts, sleep paralysis and more.

“Horror can, maybe,
constitute a religious experience of its own.”
~ Matt Cardin

This year, William Peter Blatty’s supernatural suspense novel, The Exorcist, celebrates its 40th anniversary. The story was inspired by a case of demonic possession and exorcism that took place in 1949, which Blatty learned about while attending Georgetown University in 1950.

The novel was adapted to film and released in U.S. theaters in 1973. It was directed by William Friedkin and starred Ellen Burstyn, Max von Sydow, Lee Cobb and Linda Blair and the young possessed girl. The film earned ten Academy Award nominations, including Best Picture, which it lost to The Sting. However, it did win two of those 10 nominations: one for Best Sound and the other for Best Adapted Screenplay.

The Devil
Also known as Satan, Lucifer or Beelzebub in Christianity, the Devil is a fallen angel who rebelled against God. He is said to have been the snake that tempted Eve in the Garden of Eden, the Accuser of Job, and a general, all around tempter, promoting lies and evil.

The Devil is believed to rule in Hell and has a legion of demons that follow him. Beyond Christianity, the Devil appears frequently in literature, film and popular culture.

Rudolf Otto
Rudolf Otto was a notable German Lutheran theologian and scholar of comparative religion in the late 1910s and 1920s. His most famous work, published in 1917, was The Idea of the Holy, which defines the concept of holy as “numinous.” He defined numinous as a “non-rational, non-sensory experience or feeling whose primary and immediate object is outside the self”.

This scholarly term refers to a set of religious beliefs and spiritual practices that were common to early Christianity, Hellenistic Judaism, Zoroastrianism, Greco-Roman mystery religions and Neoplatonism. The term comes from “Gnosis,” which means esoteric or intuitive knowledge. These early groups believed that a realization of Gnosis was the way to salvation of the soul from the material world, sort of like how the Ancients in the Stargate universe sought to transcend. These groups also believed that the world was not created by God, but by an intermediary being, which went by names such as Adam, Samael, Satan and Yahweh.

The concept of a demiurge was first explained in in Platonic philosophy as a creator being that fashioned and maintained the physical world. The term was later adopted by the Gnostics. Although the demiurge created the physical plane, it is not the supreme creator. Depending on the system of belief the demiurge is either separate from the supreme creator, or created by the Creator. In some systems of Gnostic thought, the demiurge is antagonistic to the Creator, sometimes even the embodiment of evil to the Creator’s good.

H.P. Lovecraft
H.P. Lovecraft was an American writer of horror, fantasy and science fiction, but his specialty was weird fiction. Much of is work was guided by the concept of “cosmic horror,” the idea that human minds couldn’t possibly comprehend life and the universe is fundamentally strange and alien. This concept is similar to what Matt refers to as “demonic dread.”

In ancient Babylonian mythology, the primordial goddess was Tiamat, a chaos monster or dragon. She was the goddess of the ocean who mated with Abzu, the god of fresh water, to give birth to the younger gods. There are two sides to the Tiamat myth. The first, just described, creates the cosmos through peaceful union. The second part portrays Tiamat as the embodiment of primordial chaos, which has been linked to the rise of patriarchal power structures, such as the rise of warfare during the Sumerian era.

During REM sleep, it is normal for the body to be paralyzed. This is so we don’t act out what we are dreaming about. However, there are cases where a person wakes from REM sleep with their body still in this state of paralysis. If this is not disconcerting enough, this paralysis may also come with terrifying hallucinations and an intense sense of danger. These hallucinations can be so vivid that they seem real. Some scientists believe that these hallucinations explain accounts of alien abductions, encounters with incubi and succubi, as well as other paranormal encounters. This 1781 painting, by Henry Fueli, called The Nightmare, depicts what sleep paralysis feels like.

The book Matt mentioned about the paranormal connections to sleep paralysis is Dark Intrusions: An Investigation into the Paranormal Nature of Sleep Paralysis Experiences by Louis Proud.

Kundalini Energy
The term “kundalini” literally means “coiled.” In yoga, this corporeal energy is an unconscious or instinctive force that lies coiled at the base of the spine in the seventh or root chakra. It is sometimes represented by a sleeping serpent and resides in the sacrum bone. It has been described as the residual power of pure desire.

American ufologist and horror author Whitley Strieber first published Communion in February 1987. The book is based on his personal experiences with what he believed to be non-human, possibly extraterrestrial entities. The book was later made into a film directed by Philippe Mora and starring Christopher Walken as Strieber.

Other works by Strieber include The Hunger and Wolfen, which are science fiction stories about vampires and werewolves, respectively.

The Dream Sequence from Prince of Darkness
In this episode of the podcast, Matt describes his first sleep paralysis experience as being similar to this scene at the end of the 1987 film Prince of Darkness, directed by John Carpenter and starring Donald Pleasence (Halloween, Alone in the Dark, You Only Live Twice), Lisa Blount (Dead & Buried, What Waits Below, Nightflyers) and Jameson Parker (Dead Man’s Island, The Secret of NIMH 2, Dead Before Dawn).

For more information about Matt Cardin:

1 comment on “Podcast Episode 50: The Intersection of Horror and Religion”