Podcast Episode 65: Horror, Humor and the Love of Slime 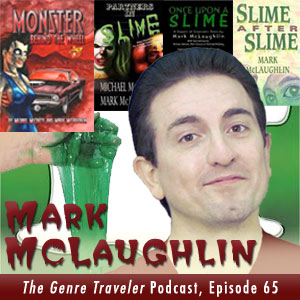 This week I chat with horror writer Mark McLaughlin about the re-release of Monster Behind the Wheel, Partners in Slime (an anthology he did with Mike McCarty and a couple of Scream Queens), the appeal of “slime” in his titles, horror and humor, killer plants, bringing the dead back to life, failed TV shows, B movies and more.

Linnea Quigley
Born in Davenport, Iowa, Quigley moved to Los Angeles in the late 1970s to pursue acting. She quickly established herself in the arena of independent films and appeared in almost one hundred feature films. She is best known for her role in The Return of the Living Dead, but has appeared in many horror films such as Nightmare Sisters, Silent Night, Deadly Night, Creepozoids, Sorority Babes in the Slimeball Bowl-O-Rama, Night of the Demons (1988 original and 2010 remake), and A Nightmare on Elm Street 4: The Dream Master.

Kyra Schon
Kyra is best known for her role as Karen Cooper in the George A. Romero film Night of the Living Dead (1968). She was the trowel-wielding zombie girl. She is a regular contributor to Dread Central, an online magazine dedicated to horror entertainment. An interesting bit of trivia: Her father, Karl Hardman, played her father in the Romero film.

Slime Mold
Formerly classified as fungi, slime molds are now classified as protists, a group of eukaryotic microorganisms that don’t really fit into the other kingdoms. Eurkaryotic cells have complex structures enclosed with membranes … human cells are eukaryotic. There name comes the phase in their life-cycle where they appear as a gelatinous slime.

Geoff Peterson
Craig Ferguson’s robot skeleton sidekick, Geoff Peterson, debuted on April 5, 2010, with limited capabilities. In July 2010, he was upgraded to be able to shake his head, keep his mouth open, and use his right hand to perform what seems to suggest a sexual act.

Geoff was designed and built by Grant Imahara of Mythbusters fame. He has glowing blue eyes, a metal mohawk and wears an oversized brown suit with a The Price Is Right name tag. He is voiced by Josh Thompson.

Geoff was inspired by Ferguson’s constant complaints of lacking a band or sidekick, coupled with his desire to have his own “Robot Skeleton Army” … a reference to The Terminator cyborgs. Also, he has expressed a keen appreciation of the motorcycle driving Ghost Rider from the Nicolas Cage film. Imahara volunteered to create this sidekick if Ferguson could get him 100,000 Twitter followers, which he accomplished in 24 hours.

The Three Stooges and Hitler
In the 1940s, the Three Stooges made several anti-Nazi movies including You Nazty Spy!, I’ll Never Heil Again and They Stooge to Conga. Moe Howard’s impersonation of Adolf Hitler highlighted these shorts.

Springtime for Hitler
Mel Brooks’ The Producers (1968), starring Gene Wilder and Zero Mostel, told the story of a theatrical producer and an accountant who want to create a flop, so they can run away to Brazil with the money when the play closes. They find a former Nazi soldier who has written a musical based on Adolf Hitler’s life and are sure they’ve found their failure … especially when they find a drugged out hippie to play the lead. Unfortunately, it becomes a popular musical comedy that is a rousing success.

Recently, Mel Brooks successfully adapted the film into a Broadway musical, as well as a re-make film (2005) starring Nathan Lane (in Mostel’s role) and Matthew Broderick (in Wilder’s role).

Winter Warlock
One of the characters in the 1970 stop-motion TV special Santa Claus Is Comin’ to Town was the Winter Warlock. He starts off evil, but when Kris Kringle gives him a toy train, his heart of ice melts as he laughs at childhood memories. In becoming good, he loses most of his magic, but he had some leftover magic feed corn that made reindeer fly … that’s how Santa got his flying reindeer.

Voldemort
Lord Voldemort, also known as “He-Who-Must-Not-Be-Named,” “the Dark Lord” or, as today’s guest put it, “Mr. No Nose,” is the chief antagonist in the Harry Potter books by J.K. Rowling. Born Tom Riddle, he believed that blood purity was important and wanted to rid the wizarding world of people who had Muggle (non-magical) heritage. He also wanted to rule both the wizarding and muggle worlds. Interesting side note, his name is supposed to be pronounced the French way with a silent “t,” which was correctly done in the first four U.S. audiobooks. However, since characters in the movies pronounced the “t,” the remaining audiobooks did, as well. The French phrase “vol de mort” means “to flee from death,” which Lord Voldemort actually does in the Harry Potter books.

Killer Plants
Man-eating plants is a recurring theme in horror. In fact, recently I read a short story in the anthology Three Messages and a Warning, that was about an illustrator who was drawing the man-eating plants imagined by a mad scientist. Also, a recent episode of Haven featured attacking plants. Here’s a link to the article Mark wrote about “floraphobia”: www.horrorgarage.com/horror/column-mark-mclaughlin-floraphobia.php

Mamie Van Doren
This American actress and singer rose to popularity as Universal Pictures version of Marilyn Monroe, with her platinum blonde hair and curvaceous figure. Because of many of the roles she played in film, she was known as “Hollywood’s Bad Girl” and of “The Three M’s” … the other two being Monroe and Jayne Mansfield.

Actors with strongly identified characters
Some actors portray a character so well that fans lose sight that this is a fictional character separate from the actor. Some notable examples include: 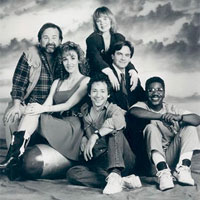 Woops!
This post-apocalyptic sitcom aired on Fox from Sept. 27 to Dec. 6, 1992. It centered on six survivors of a world nuclear holocaust living in an abandoned farm house. It starred Evan Handler (Sex and the City, Californication), Fred Applegate (whose gone on to do Broadway), Meagan Fey (Charmed, Freaks and Geeks), Cleavant Derricks (Sliders), Marita Geraghty (Groundhog Day) and Lane Davies (Good & Evil, The Crew).

Cavemen
Based on the GEICO cavemen ads, this dramedy ran on ABC from Oc. 2 through Nov. 13, 2007. The show was put on hiatus during the Writers Guild of America strike and didn’t survive. The final six episodes never aired in US markets.

Threshold
Produced by Brannon Braga, David S. Goyer and David Heyman, this science fiction TV drama first aired on CBS in September 2005. It first aired on Fridays then moved to Tuesdays, which ended up hurting ratings. The show was canceled on Nov. 23, 2005. The final four episodes were never aired in the US, but are available on the DVD.

In 2005, the TV series was re-booted. This time Stuart Townsend (Queen of the Damned, The League of Extraordinary Gentlemen) played Kolchak … and the series was canceled before the first season was complete.

The Abominable Dr. Phibes
Vincent Price starred in this 1971 horror film about a man, horribly disfigured in a car crash, who takes revenge on the doctors he thought were the cause of his wife’s death. He kills them using methods based on the Ten Plagues of Egypt from the Old Testament. Once he has exacted his revenge, he commits suicide, embalming himself while lying next to the embalmed body of his wife. Of course, as with many horror films, it was followed by a sequel, Dr. Phibes Rises Again. Dr. Phibes is resurrected by a predestined angle of the moon and finds that his house has been demolished and his papyrus scrolls from the Pharoh’s Tomb stolen. Those papers have the information he needs to resurrect his wife, so he goes off in search of the thieves leaving bodies in his wake.

For more information about Mark McLaughlin:

1 comment on “Podcast Episode 65: Horror, Humor and the Love of Slime”