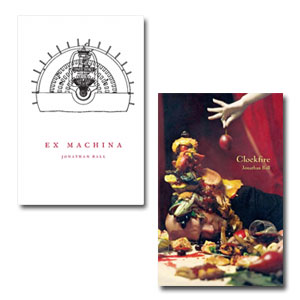 In which The Genre Traveler waxes philosophical with author, screenwriter and humor columnist Jonathan Ball. Listen in to this week’s episode as we discuss finding where your writing fits — your identity as a writer — getting inspiration from song lyrics, his unusual books Ex Machina and Clockfire, the nature of art, human subjectivity, the relationship of horror and humor, the nature of horror and more.

Performance Art
According to Wikipedia, “performance art is a performance presented to an audience, traditionally interdisciplinary.” I can “be either scripted or unscripted, random or carefully orchestrated; spontaneous or otherwise carefully planned with or without audience participation. The performance can be live or via media; the performer can be present or absent.” To some degree, flash mobs are a form of performance art. Performance art “can be any situation that involves four basic elements: time, space, the performer’s body, or presence in a medium, and a relationship between performer and audience. Performance art can happen anywhere, in any venue or setting and for any length of time. The actions of an individual or a group at a particular place and in a particular time constitute the work.”

Yoko Ono, known in part for her marriage to John Lennon, was also known for her performance art that often included audience interaction. Here is an example:

Canadian poet originally from Saskatchewan but now lives in Manitoba. His first works, Leaving (1980) and Fielding (1983), an extended poem in memory of his father, have been followed by 5 other collections, including Bloody Jack (1984), a book-length poem about a Manitoba bandit hero from the early years of the century. He has also written 2 critical studies of Canadian literature and edited several anthologies of prairie poetry.

One of this iconoclastic Victorian author’s most famous pieces was the Utopian satire Erewhon: or, Over the Range. Published anonymously in 1872, the book tells of the discovery of a fictional country “Erewhon” (an anagram of nowhere) and is a satire of Victorian society.

Horror Into Humor
As part of our discussion, Jonathan Ball makes a reference to the scene from Alfred Hitchcock’s The Birds and how the number of birds can change the scene from horror to humor. He also mentioned a Leslie Neilson spoof of that scene. I couldn’t find any reference to Neilson spoofing that scene, however he has spoofed other famous Hitchcock scenes. Below is a side by side comparison of the famous crow scene from The Birds and its parody in Mel Brooks’ High Anxiety.

Invisible Cities by Italo Calvino
An Italian novel published in 1972 that explores imagination and the imaginable through the descriptions of cities by explorer Marco Polo. It was nominated for the Nebula Award for Best Novel in 1975.

Ontological Nightmares
The word “ontology” comes from the Greek word meaning “of that which is” and the word “science, study, theory.” It is the philosophical study of “being, existence or reality.” Therefore an ontological nightmare would be the horror of existence.

For more information about Jonathan Ball: