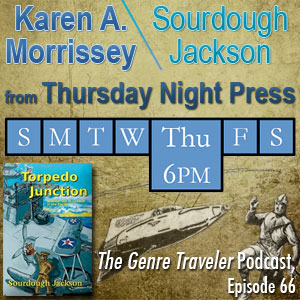 NOTE: The volume for this week’s guests recorded very low. In order to match it with my voice and allow you to hear what they were saying I had to increase their volume. This brought with it some hissing back ground noise. Therefore the quality of this recording is not great, but listenable.

Sourdough Jackson’s Torpedo Junction is available in paperback and Kindle versions on Amazon.com. You can view a preview of Karen Morrissey’s Fisher King: Percival’s Descent here.

Erwin Rommel
Popularly known as the Desert Fox, Rommel was a German Field Marshal during the second World War. He got his nick name for his time leading the German and Italian forces in the North African campaign. He proved to be one of the most skilled commanders of desert warfare in that conflict. He was respected as a humane and professional officer, treating captured soldiers humanely and ignoring orders to kill captured commandos and Jewish soldiers and civilians. Later, he was linked to the conspiracy to kill Adolf Hitler. For this treason, Hitler decided to eliminate Rommel, but quietly because of his renown. In exchange for assurances that his family would be spared, Rommel agreed to commit suicide.

Anson MacDonald
One of Robert A. Heinlein’s pen names was Anson MacDonald, created by Scot John W. Campbell Jr., the editor of Astounding Science Fiction during Heinlein’s early career. Anson was Heinlein’s middle name and MacDonald was taken from Heinlein’s second wife’s maiden name. He closely guarded his reputation under both his name and Anson’s, reserving his top tier work for these names.

Harry Turtledove
Author Harry Turtledove is probably best known for his alternate history stories, although he also writes historical fiction, fantasy and science fiction. His first two novels were published in 1979 under the pen name “Eric G. Iverson” because his publisher felt that people wouldn’t believe that “Turtledove” was a real name. Dubbed “The Master of Alternate History,” his novels have been credited with bringing the genre into the mainstream.

Leslie Fish
Leslie Fish is one of the most well-known filk musicians. In 1976, she created the first commercial filk recording, followed by another in 1977. Her best known song is “Banned from Argo,” which has spawned more than 80 variants and parodies.

The Fisher King
The Fisher or Wounded King is a character from Arthurian legend charged with keeping the Holy Grail. Specifics vary, but his is always wounded in the legs or groin make it impossible for him to move on his own. His land suffers as he does and all he can do is fish from the river near his castle. Some works even separate this character into two … a father and son or grandfather and grandson. In those versions, the older of the two never leaves the castle, while the younger can see guests and goes fishing. Both are always wounded.

Scott Edelman
Edelman was the founding editor of Science Fiction Age, published 1992 to 2000, and later became editor of SCI FI Magazine, the official magazine of the Sci Fi Channel (now SyFy). He has edited the channel’s online magazine, Science Fiction Weekly since 2000. Other publications he has edited include Last Wave (semi-professional, 1982-1985), Rampage (covered pro-wrestling), Sci-Fi Universe, Sci-Fi Flix and Satellite Orbit. In the 1970s, he worked in comic books, writing horror comics for both Marvel and DC. He created Scarecrow for Marvel and has written several short stories, as well as the Lambda Award-nominated novel The Gift.

Sentient Stuffed Animals
Toys that are somehow alive or sentient is not a new them in literature. There are plenty of stories out there featuring them, such as Winnie-the-Pooh, The Adventures of Raggedy Ann and Andy and The Indian in the Cupboard. You can find lists of sentient toys in fiction on GoodReads.com and Wikipedia.com. Many children go through a phase where they believe on some level that their toys are alive. I mentioned my story of Tigger in this podcast. Here is a picture of me and my Tigger. To have a larger view, click on the image.

For more information about Karen Morrissey and Sourdough Jackson: