Podcast Episode 60: A Map of Contents 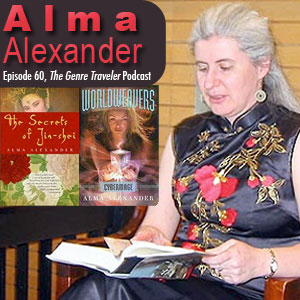 In this episode, The Genre Traveler chats with internationally published novelist Alma Alexander. Our conversation touches on how her single book became a duology, the wildly difference covers one of her books had, editorial quirks, the different between historical fantasy and historical fiction, living around the world, the mob mentality, how ideas are formed, her new anthology that has a map of contents — rather than a table of contents, and more.

The time in Chinese history known as Imperial China took place between 221 BC (the beginning of the Qin Dynasty) and 1912 AD (the end of the Qing Dynasty). Imperial China was preceded by the Warring States Period and followed by the Republic of China. Several dynasties occurred during Imperial China: Qin, Han, Cao Wei, Jin, Wu Hu, Sui, Tang, Song, Liao, Xia, Yuan, Ming and others.

The Great Proletarian Cultural Revolution was a socio-political movement that took place from 1966 to 1976 in the People’s Republic of China. The goal of the revolution, set into motion by Communist Party Chairman Mao Zedong, was to enforce socialism in China by removing capitalist, traditional and cultural elements from Chinese society, as well as impose Maoist orthodoxy within the Party. The revolutions fomented violet factional struggles and millions of people were persecuted, suffering a wide range of abuses such as rape, torture, sustained harassment, imprisonment and seizure of property.

Best known for the Welsh Princess trilogy and Plantagenet series, Penman is an American historical novelist. Her novels are usually set in England, France or Wales and about the English and Welsh royalty during the Middle Ages. Some of her work has reached the New York Times Bestsellter List and she is known for her meticulous research of settings and events, as well as her characterizations.

The psychology of a crowd is different than the psychology of an individual. There are different theories for explaining this. Sigmund Freud believed that people’s minds merge is some way, with each member becoming less aware of the true nature of their own actions. There are proponents and dissenters of this concept. Another theory is that of convergence. Convergence theory postulates that the crowd’s behavior is carried into it by particular individuals. In other words, people of like minds converge to form a crowd. Contagion theory says the opposite, that crowds cause people to act a certain way.

The luddites were a social movement in the 1800s in which textile artisans rebelled against the changes occurring with the Industrial Revolution, often by destroying mechanized looms. The movement was named after General Ned Ludd, a mythical figure who, supposedly in 1779, smashed two knitting frames in a “fit of passion.” He is also known by the names Captain Ludd or King Ludd. Today, the term is used to refer to individuals who are against industrialization, automation, computerization or any new technology in general.

This is the fictional land where Winnie-the-Pooh and his friends from the series of children’s books by A.A. Milne reside. The young boy Christopher Robin would accompany Pooh there to visit and play. In the books, the Hundred Acre Wood is part of a larger forest and is centered around Owl’s home. In the movies, the term is used for the entire Pooh bear world.

For more information about Alma Alexander: