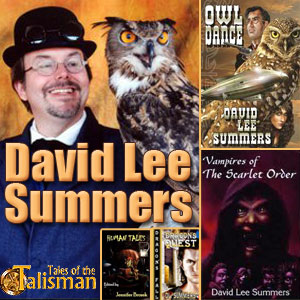 This week I chat with author and poet David Lee Summers about his latest alternate history novel, Owl Dance, his take on the Grimm Brothers’ “The Griffin,” his new ebook serialized novel, selling ebooks, science fiction poetry and how he got into writing it, working at Kitt Peak National Observatory, and more.

NOTE: There are some quality issues with this recording. There are breaks here and there inside words, sometimes even obliterating words. I did what I could to correct as much as I could, but some just wasn’t fixable given my skills and technology. That said, you can understand what he’s saying and I don’t think its too annoying.

This television show that fused science fiction, westerns and sometimes horror aired on CBS for four seasons. It was conceived by Michael Garrison as “James Bond on horseback.” Robert Conrad played James West and Ross Martin played his master-of-disguises sidekick Artemus Gordon. They were secret agents who solved a variety of dastardly plans in the old west. Their arch-villain was Dr. Miguelito Quixote Loveless, a brilliant, megalomaniac dwarf played by Michael Dunn. The original cast was reunited for two television movies in 1979 and 1980. In 1999, a feature film adaptation was released, this time with Will Smith as West and Kevin Kline as Gordon.

The Adventures of Brisco County Jr. (1993-1994)
This science fiction western TV series ran for 27 episodes on the Fox network during the Fall 1993 season. It starred Bruce Campbell (Bubba Ho-tep, The Evil Dead) as a Harvard-educated lawyer-turned-bounty hunter in 1893.

These tiny but long-legged owls are found throughout open landscapes of North and South America, in grasslands, rangelands, agricultural areas, deserts and other areas with low vegetation. They are called burrowing owls because they nest and roost in burrows, much like those excavated by prairie dogs. Unlike most owls, burrowing owls are active during the day, but try to avoid the mid-day heat. However, they still do most of their hunting between dusk and dawn.

Owls in Legend and Literature

Harry Potter’s owl Hedwig is part companion, part messenger. She was given to him by Hagrid as a birthday present. Bubo is the owl in Clash of the Titans. He is given to Perseus by Athena upon the order of Zeus as a replacement for his lost helmet of invisibility. In many cultures, probably because of its nocturnal nature, the owl represents the spirit world and is connected to supernatural powers. The Romans thought they were a signal of death. And in one Navajo myth, when someone dies their soul takes the form of an owl.

Athena’s Owl
In Greek mythology, Athena was the goddess of wisdom, courage, inspiration, civilization, warfare, strength, strategy, the arts, crafts, justice and skill. She was born fully formed out of the head of Zeus. One of her symbols was the owl. One theory is that she evolved from an earlier bird goddess, perhaps the one depicted on a Mesopotamian terra cotta relief shown with owls, wings and bird talons. Some belief that here earliest form, before becoming human in form, was that of an owl. The owl’s role as a symbol of wisdom originates with its association with Athena.

The Griffin by the Grimm Brothers

In this German fairy tale, a king’s daughter is ill and can only be cured by an apple. The king promises the hand of his daughter in marriage to anyone who can find and bring this special apple. When a young peasant successfully brings said apple, the king refuses to honor his promise unless the young man completes several impossible tasks, one of which is tobring a feather from the Griffin’s tail. You can read the story at portitude.com. A griffin has the body of a lion and the head and wing of an eagle. It is known for guarding treasures and has been a symbol of divine power.

The concept of serializing a story dates back to at least the One Thousand and One Nights. It is a form of storytelling in which a larger story is told, published or aired in installments. Novels and novellas have been serialized in magazines and chap books. Stories have also been serialized on radio, the movie theater and television. This should not be confused with sequels or prequels … serialized fiction could be told in one piece because each installment is an integral part of the whole.

The American fantasy, horror, science fiction and mystery writer Ray Bradbury is best known for his dystopian future novel Fahrenheit 451 and his Mars-themed anthology The Martian Chronicles. Much of his work has been adapted for stage, film, television, radio and comic books. In fact, from 1951 to 1954, 27 of his short stories were adapted for EC Comics and 16 of those were collected into paperback books by Ballantine Books: The Autumn People (1965) and Tomorrow Midnight (1966). From 1985 to 1992, he hosted a syndicated anthology TV series called The Ray Bradbury Theater for which he adapted 65 of his short stories.

Science fiction, fantasy, horror and other speculative themed haiku are called scifaiku. The term was first coined by Tom Brinck in his 1995 Scifiaiku Manifesto. Like Japanese haiku, scifaiku is minimalist and often follows the 5-7-5 syllable format. You can learn more about this art form at www.scifaiku.com. But for now, enjoy a couple I wrote:

Located at Kitt Peak in the Arizona-Sonoral Desert of the Tohono O’odham Nation, southwest of Tucson, this U.S. astronomical observatory is part of the National Optical Astronomy Observatory (NOAO) system. Some of the most important science discoveries to come out of this observatory include galaxy rotation curves, high redshift galaxies and star formation.

Your body’s natural clock, its circadian rhythm, drives your biochemical, physiological and behavioral processes on a roughly 24-hour cycle. This rhythm is endogenous, or “built-in” to your body, but gets adjusted by outside forces from the environment, such as daylight. Research has shown that disrupting this biological clock can have negative effects on your health. Sometimes these effects are relatively minor, such as the fatigue, disorientation and insomnia associated with jetlag. But sleep disorders and bipolar disorder have been associated with irregular circadian rhythms. There is evidence that disrupting your biological clock for too long can exacerbate cardiovascular disease and may increase the risk of developing cancer.

In July 1994, fragments of this comet collided with Jupiter, providing astronomers the first direct observation of an extraterrestrial collision of solar system objects. There was a lot of media coverage of the event, and it enabled astronomers to uncover new information about Jupiter. The comet was discovered by Carolyn and Eugene Shoemaker and David Levy (thus the name) in 1993. It was the first comet to be observed orbiting a planet. Jupiter’s tidal forces pulled the comet apart and caused it to crash into the planet.