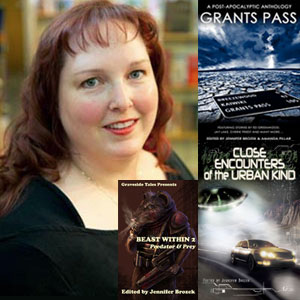 This week I chat with author and editor Jennifer Brozek. We chat about various aspects of her work, from editing anthologies to writing for role playing games (RPGs), touching on the processes of editing and pulling together anthologies, improving your stories, writing for RPGs, her most rewarding and challenging projects, researching historical information, and more along the way.

Magic Realism
In an post I wrote on Examimer.com, I defined magic realism thusly:

“Fantasy stories that weave magical elements into real elements as if they were ordinary occurrences make up the subgenre of magic realism. In other words, if it weren’t for the magic, the story could be considered ordinary or mundane.

Magic realism stretched the definition of reality to include things this side of impossible. Magic becomes ordinary.”

Also known as The Troll or the Troll Under the Bridge, the Fremont Troll is an 18-foot high, mixed media statue in the Fremont neighborhood of Seattle, Wash. It is located on N. 36th Street, under the north end of the Aurora Bridge. It looks like it is coming out of the ground and clutches in its left hand a Volkswagen Beetle. Four local artists, Steve Badanes, Will Martin, Donna Walter and Ross Whitehead, sculpted it in 1990 as part of a competition sponsored by the Fremont Arts Council. In 2005, Aurora Avenue North was renamed “Troll Avenue” in its honor.
(Click on the image to see a larger view.)

In the Discworld novels by Terry Pratchett, trolls are essentially mobile, living rocks. They are dormant and sluggish during the daylight, making them nocturnal in nature. The heat negatively affects the conductivity of their silicon brains, so they actually get smarter the colder they get. That said, they can still freeze to death … but at a much lower temperature than their non-rock companions. This image is from the short film Troll Bridge based on one of Pratchett’s stories featuring Cohen the Barbarian. 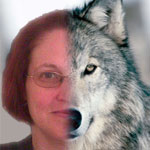 The idea of an entity that can change its form to look like something else, often human, is a common theme in mythology, folklore and fairy tales. The Greet god Zeus often seduced human women in strange forms such as bull or a shower of gold. The fairy tale character Puss in Boots convinced an ogre to change shape into a mouse so he could eat him. And then there are the numerous legends of werewolves, the kitsune (Japanese shapeshifting foxes), selkies (Scottish seals that can take human form) and others from a wide variety of cultures.

These rules appeared Robert A. Heinlein’s 1947 essay “On the Writing of Speculative Fiction”:

Founded in 1762 as Elizabethtown by a German immigrant from Pennsylvania, the city became known as Hagerstown in 1813 because the name had gained popular usage. Jonathan Hager originally purchased the 200 acres of land Hagerstown stands on in 1739 and called it Hager’s Fancy. He named the town after his wife, Elizabeth Kershner. In 1776, Hager’s efforts to make Elizabethtown the seat of the newly created Washington County gave him the nickname the “Father of Washington County.” That’s why the name was changed and in 1814, the Maryland State Legislature officially endorsed the change.

For more information about Jennifer Brozek: