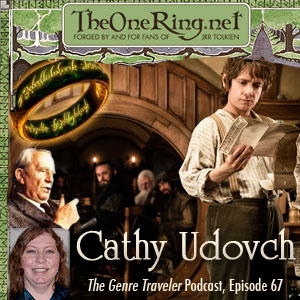 This year, The Hobbit celebrates its 75th anniversary of publication and, the new live film adaptation of the book, directed by Peter Jackson, is due at at year’s end. In August, Loughborough University will host The Return of the Ring, the Tolkien Society’s celebration of all things Tolkien, and there will be other Tolkien related events occurring throughout year. So, since January 3 is that annual Birthday Toast to J.R.R. Tolkien, I thought a Tolkien-themed podcast was in order. Luckily for us, a long time staffer of TheOneRing.net was available. Enjoy!

This week I chat with Cathy Udovch, also known as Garfeimao, a long time staffer at TheOneRing.net, the largest Tolkien fan website on the internet. During the podcast, we talk about the new The Hobbit films, how the story is being fleshed out from Tolkien’s original version, the necessity of maps for epic fantasy, how critic received Tolkien’s work when The Lord of the Rings first came out, how movies encourage reading, Andy Serkis and more.

Martin Freeman
The Hobbit had to take a break in filming last year because Martin Freeman, who plays Bilbo Baggins in the two-part The Hobbit film, also plays Dr. John Watson on the BBC series Sherlock.

A Ring of Truth
In the a 1977 animated version of The Hobbit, after Bilbo escapes from Gollum with the ring and has told his somewhat modified version of his adventure tale to the dwarves, Gandalf says …

Your story, Bilbo, has the ring of truth. Yes, it rings true.

Did you catch that wink at the end?

Wagnerian Stories
In this episode, Cathy compares the original Hobbit tale to the fantasy operas of Richard Wagner. Wagner has been compared to Tolkien, primarily for his mythic storytelling, his ability to make completely fictional stories feel like they are much older.

Midnight in Paris
This 2011 Woody Allen romantic comedy centers on a group of Americans visiting Paris. Gil (Owen Wilson), the lead character, is a screenwriter who is trying to finish his first novel. His fiancee, Inez (Rachel McAdams), dismisses his ambition as a romantic daydream. One midnight he gets drunk and wanders the city and then finds himself transported to the 1920s. Among the people he meets are F. Scott Fitzgerald (Tom Hiddleston), Ernest Hemingway (Corey Stoll) and Gertrude Stein (Kathy Bates).

The Eyes of the Dragon
This 1987 novel was a surprise deviation for author Stephen King when it came out. Unlike his other work, this story was a classic fantasy with magic and a clearly established battle between good and evil. Characters from this book also become involved in King’s later Dark Tower series. Interestingly enough, the villain in The Eyes of the Dragon, Randall Flagg, first made his appearance in The Stand, which was first published in 1978 and later re-released in 1990.

Rise of the Planet of the Apes
In the 2011 re-imagining of this film, Andy Serkis (who plays Gollum in The Hobbit and The Lord of the Rings films) plays Caesar, the chimpanzee who gains increased intelligence due to genetic experiments and lead the ape revolt.

The Adventures of Tintin
Based on a series of classic comic books created by George Remi (under the pen name Herge) from 1907 to 1983, this 2011 animated film is directed by Steven Spielberg. Unlike most animated films, Tintin is created through performance capture techniques used to create such digital characters as Gollum (The Hobbit) and Caeser (Rise of the Planet of the Apes). Andy Serkis, who played both those characters portrays Captain Haddock, Tintin’s best friend.

Dragonheart
Sean Connery was the voice of Draco the dragon in this 1996 fantasy film directed by Rob Cohen. The animators were inspired by Connery’s actual performance in animating Draco’s facial expressions.

For more information about Cathy Udovch: