Podcast Episode 32: Fighting with Yourself in a Video Game 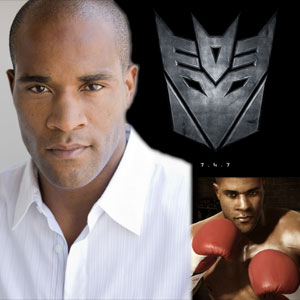 Actor/model LaMonica Garrett joins us to chat about his role in the upcoming third Transformer film, working with characters that aren’t there in the real world, favorite science fiction shows, the overlap of westerns and science fiction, his genre connections, working with Rebecca Romijn, working on Fight Night: Champion, playing a video game in which you are the lead character, scary horror films, and more.

NOTE: I was mistaken; it is not LaMonica in the Transformers Superbowl trailer.

Transformers
The Transformers began as a Hasbro toy line in the mid-1980s. The line centered on two warring factions of alien robots, the Autobots and the Decepticons. Due to the popularity of the toys, the franchise expanded into comic book, animation, video games and now films.

The basic story line of Transformers is that on the planet Cybertron there was a race of sentient robots who are basically humanoid in appearance, but can transform into a variety of machines, vehicles and other mechanical objects.

The Autobots the “good” robots and the Decepticons are the “evil” robots. Autobots have blue eyes and tend to transform into civilian vehicles. However, some Autobots can transform into aircraft, military vehicles, communication devices, weapons, and cyborg animals. Decepticons have red eyes and usually turn into some form of aircraft. Many turn into military vehicles, construction vehicles and even smaller-than-human-sized objects.

LaMonica mentioned Bumblebee, Optimus Prime and Megatron in particular. Bumblebee is a small, yellow Autobot who turns into a compact car. Optimus Prime is the leader of the Autobots who turns into a cab over truck. Megatron is the leader of the Decepticons (in most versions of the Transformers universe) and tends to transform into military hardware, such as a Walther P38 pistol. 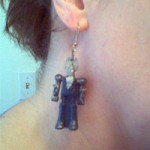 My Transformer Earrings
In the 1980s, I was totally into big earrings. So when I saw these little goofy gems, I just had to have them! And I still do. This picture was taken on May 1, 2011. They have holes in the bottom, so they could be used as pencil toppers, too. 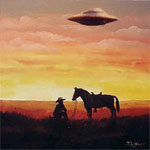 Mostly found in film and television, the science fiction subgenre of space western takes the typical themes of American Western literature an film and places them in space … the space frontier, so to speak. In fact, Star Trek was pitched as “Wagon Train to the Stars” — Wagon Train was a popular TV Western in the 1950s and 1960s.

Another similar subgenre is the science fiction western, which rather than placing Western themes in space, brings science fiction elements into the Old West. This genre overlaps with both alternate history and steampunk.

Genre Stars LaMonica Has Worked With 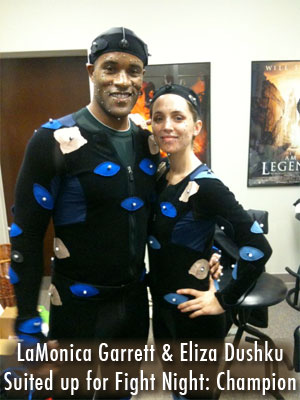 Eastwick
This short-lived 2009 TV series starred Jaime Ray Newman (Eureka, Stargate: Atlantis), Linsay Price (Club Dread) and Rebecca Romijn (Mystique from the X-Men films) as three women who discover they are witches. The show was developed by Maggie Friedman based on the John Updike novel, The Witches of Eastwick, which was also made into a film starring Cher, Susan Sarandon and Michelle Pfeiffer as the witches. 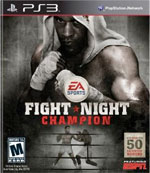 This boxing video game from EA Sports was released on March 1, 2011 for PlayStation 3 and Xbox 360. Unlike previous installments in the series, this game focuses on a single character, Andre Bishop, voiced by LaMonica Garrett. It is also supposed to have “grittier” and “darker” animation than early games and players can get damage that “truly conveys the brutality of the sport of boxing.” Champion mode, written by Academy Award-nominated screenwriter Will Rokos (Monsters’s Ball, TV’s Southland), puts players in the shoes of Bishop as he discovers that becoming a champion involves more than just what happens between the ropes. 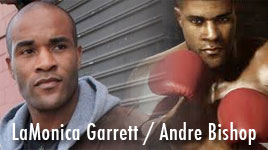 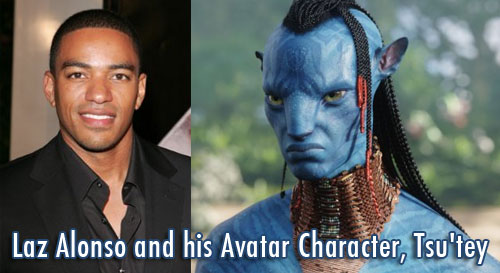 For more information about LaMonica Garrett:

1 comment on “Podcast Episode 32: Fighting with Yourself in a Video Game”