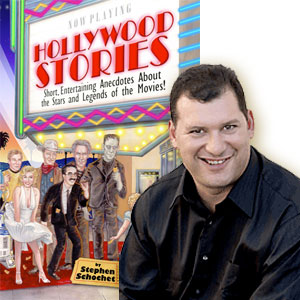 German actress and singer Marlena Dietrich started out on stage and in silent films, but constantly re-invented herself. She remained popular throughout her career, which eventually brought her to Hollywood. She was a woman of strong political convictions … as well as the mind to speak them … and loved performing for the troops during World War II. She says she could have changed history if she had married Adolph Hitler. Her genre roles include Jamilla in the 1944 fantasy Kismet and a cameo in the 1956 adaptation of Jules Verne’s fantasy adventure Around the World in 80 Days.

Canadian-American actor, comedian, singer and writer Jim Carrey is best known for his over-the-top crazy sense of humor and physical comedy. In perfect form, he gave the tourists at Universal Studios a surprise treat. His genre roles include Once Bitten, Peggy Sue Got Married, Earth Girls Are Easy, The Mask, Batman Forever, Liar Liar, The Truman Show, How the Grinch Stole Christmas (2000), Bruce Almighty, Eternal Sunshine of the Spotless Mind, Lemony Snicket’s A Series of Unfortunate Events and Horton Hears a Who!.

American actor Marlon Brando is best known for his roles as Stanley Kowalski in A Streetcar Named Desire (1951), Terry Malloy in On the Waterfront (1954) and Vito Corleone in The Godfather (1972). He had a significant impact on film action, most notable the “method” acting style. His genre roles include Candy (1968), The Nightcomers (1971), Superman (1978) and The Island of Dr. Moreau (1996).

American actor Kirk Alyn was the first man to step into the live action role of Superman on screen, portraying the Man of Steel in the 1948 serial Superman and its sequel Atom Man vs. Superman. Besides these two, his genre roles include a spot on Battlestar Galactica in 1979, and Time Warp in 1981. He also did an uncredited cameo in the 1978 Superman as young Lois Lane’s father on the train.

American actor, screenwriter, director and producer Douglas Fairbanks was one of the original founding members of United Artists. He is best known for his swashbuckling roles in the silent films such as The Thief of Bagdad, Robin Hood and The Mark of Zorro. In addition to these genre roles, he was in The Black Pirate, as well.

Shuster was a Canadian-born American comic book artist and Jerry Siegel was an American comic book writer. Together they created the character of Superman, the first of the great comic book superheroes. They were posthumously inducted into both the comic book industry’s Will Eisner Comic Book Hall of Fame in 1992 and the Jack Kirby Hall of Fame in 1993. Superman started off as a telepathic villain, but when the character was unsuccessful, Siegel re-imagined him into the hero we know today. Shuster modeled Superman after Douglas Fairbanks Sr. and his alter ego, Clark Kent, after Harold Lloyd.

Canadian actor William Shatner is best known to genre fans for his portray of Captain James T. Kirk in Star Trek. He also authored a series of science fiction novels called TekWar, which were adapted for television and he played a role in. In addition to these two roles, his genre work includes guest spots on Alfred Hitchcock Presents, Thriller, Twilight Zone, The Outer Limits, The Man from U.N.C.L.E., Off to See the Wizard, The Sixth Sense, The Six Million Dollar Man, The Ray Bradbury Theater, SeaQuest 2032, Hercules (animated) and 3rd Rock from the Sun, as well as roles in Incubus, The Horror at 37,000 Feet, The Devil’s Rain, Kingdom of the Spiders, Voice of the Planet, The First Men in the Moon and Horrorween.

American television screenwriter, producer and futurist Gene Roddenberry is best know for creating Star Trek. In the early 1970s, he pitched pilots for three other series that never got picked up: The Questor Tapes, Spectre and Genesis II. However, Genesis II was reworked into the show Planet Earth.

Chief William Parker was the longest serving police chief, serving on the Los Angeles Police Department for 39 years. Gene Roddenberry, who once served as an LAPD officer and wrote speeches for Parker, supposedly modeled the character of Mr. Spock after him.

American actor, film director, poet, musician and photographer Leonard Nimoy is best known for his role as Spock in the Star Trek TV series and films. But this isn’t the only genre work he has done. He has also appeared in Zombies of the Stratosphere, Them!, The Brain Eaters, Twilight Zone, The Outer Limits, The Man from U.N.C.L.E., Kraft Suspense Theatre, Get Smart, Rod Serling’s Night Gallery, Invasion of the Body Snatchers, Faerie Tale Theatre, The Transformers: The Movie, The Halloween Tree, The Outer Limits (reboot), The First Men in the Moon, The Lost World (1998), Brave New World (1998), Invasion America, Sinbad: Beyond the Veil of Mists, Atlantis: The Lost Empire, The Land of the Lost (2009) and Fringe, as well as the forthcoming Transformers: Dark of the Moon. He is also rumored to be the voice of Smaug in Peter Jackson’s upcoming The Hobbit.

American actor DeForest Kelley was best known to genre fans for is role as Dr. Leonard “Bones” McCoy on Star Trek. However, he does have a few other genre appearances on his resume: several episodes of Science Fiction Theatre, Night of the Lepus (a horror movie featuring killer mutant rabbits) and the voice of Viking 1 on The Brave Little Toaster Goes to Mars.

Boris Karloff is best remembered for his iconic roles in horror films such as Frankenstein, Bride of Frankenstein and Son of Frankestein, as well as for narrating Dr. Seuss’ How the Grinch Stole Christmas. Because he was so successful portraying Frankenstein’s monster, he is sometimes confused with Glenn Strange who portrayed the monster in House of Frankenstein, House of Dracula and Bud Abbott and Lou Costello Meet Frankenstein. Karloff’s career included many genre films, including The Old Dark House, The Mask of Fu Manchu, The Mummy, The Ghoul, The Black Cat, The Raven (1935), The Black Room, The Invisible Ray, The Walking Dead, The Man Who Lived Again, The Man They Could Not Hang, Black Friday, The Man with Nine Lives, Before I Hang, The Ape, You’ll Find Out, The Devil Commands, The Boogie Man Will Get You, The Climax, The Body Snatcher, Isle of the Dead, Bedlam, The Secret Life of Walter Mitty, The Strange Door, Abbott and Costello Meet the Killer, Boris Karloff, Abbott and Costello Meet Dr. Jekyll and Mr. Hyde, Voodoo Island, The Haunted Strangler, Corridors of Blood, The Raven (1963), The Terror, The Comedy of Terrors, Die, Monster, Die!, The Ghost in the Invisible Bikini, The Daydreamer, The Sorcerers, House of Evil, The Fear Chamber, Curse of the Crimson Altar, Isle of the Snake People and Alien Terror.

Hungarian stage and screen actor Bela Lugosi is best remembered for his iconic portray as Count Dracula in the 1931 horror classic Dracula. He got the role in part because of his performance in the stage version, much like Frank Langella would later do. His success as the count led to many further genre roles in such films as The Black Camel, Murders in the Rue Morgue, White Zombie, Chandu the Magician, Island of Lost Souls, The Return of Chandu, The Mysterious Mr. Wong, Mark of the Vampire, Phantom Ship, The Raven (1935), Murder by Television, The Invisible Ray, Shadow of Chinatown, Son of Frankenstein, The Gorilla, The Phantom Creeps, The Human Monster, Black Friday, The Devil Bat, You’ll Find Out, Invisible Ghost, The Black Cat, Spooks Run Wild, The Wolf Man, The Ghost of Frankenstein, The Corpse Vanishes, Night Monster, The Ape Man, Frankenstein Meets the Wolf Man, Ghosts on the Loose, The Return of the Vampire, Voodoo Man, Return of the Ape man, One Body Too Many, Zombies on Broadway, The Body Snatcher, Bud Abbott and Lou Costello Meet Frankenstein, My Son, The Vampire, Bela Lugosi Meets a Brooklyn Gorilla, Bride of the Monster, The Black Sleep and Plan 9 from Outer Space.

English actor, director and producer Laurence Olivier is one of the most famous and revered actors of the 20th century. His roles on stage and screen range from Greek tragedy to Shakespeare to Restoration comedy to drama. His genre films include The Boys from Brazil, Dracula (1979) and Clash of the Titans (1981).

Canadian-born film actress Mary Pickford started off in silent films and was one of the original 36 founders of the Academy of Motion Picture Arts and Sciences. She was known as “America’s Sweetheart” and was a pioneer of early Hollywood, as well as one of the co-founders of United Artists. Her genre work includes Cinderella (1914) and The Black Pirate.

Mexican radio, television, theatre and film actor Ricardo Montalbán is best known to genre fans for his portrayal of Khan Noonien Singh in the 1967 episode “Space Seed” on Star Trek and the film Star Trek II: The Wrath of Kahn. His silky voice helped him land the spokesmanship for Chrysler Cordoba in the mid-1970s. His genre appearances include Alfred Hitchcock Presents, Zorro (1961 TV series), The Man from U.N.C.L.E., Alice Through the Looking Glass, The Wild Wild West, Conquest of the Planet of the Apes, Wonder Woman, The Mark of Zorro, Fantasy Island, Spy Kids 2: Island of Lost Dreams and Spy Kids 3-D: Game Over.

For more information about Stephen Schochet: