Podcast Episode 33: Being a Werewolf Isn’t a Curse! 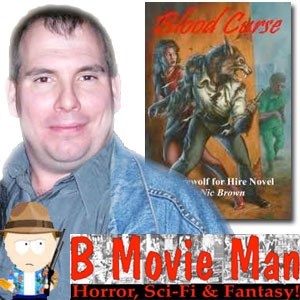 Nic Brown, author of Blood Curse, the first book in the Werewolf for Hire series of paranormal detective books, is also the creator of the B Movie Man website. During the podcast we chat about his books, werewolf rules, how being a werewolf can help you as a detective, favorite werewolf movies, American versions of British TV shows, B movies, becoming a better writer, the formula for a SyFy film, and more.

Doctor Who
Produced by the BBC, Doctor Who has been going, off and on, since 1963. It is listed in the Guinness World Records as the longest-running science fiction television show in the world, and as the “most successful” science fiction series of all time, in terms of its overall broadcast ratings, DVD and book sales, iTunes traffic, and “illegal downloads”.

The series centers on a mysterious and eccentric alien known only as the Doctor who travels through time in a TARDIS (Time And Relative Dimensions In Space) that looks, on the outside, like a 1950s British police box. The Doctor has been played by eleven actors, the explanation being that periodically the Doctor needs to regenerate, taking on a new body and, to some degree, a new personality.

Deep Red (1994)
Directed by Craig R. Baxley and starring Joanna Pacula, Micahel Biehn and John de Lancie, this made for TV film is a throw back to film noir detective films. Joe Keyes (Biehn) is a private detective who gets caught up in a strange mystery involving alien nanites when a beautiful blonde comes into is office with a request to help protect her and her daughter from an obsessed scientist (de Lancie).

Jim Wynorski
A 25-year veteran in the Hollywood exploitation field, including such “classics” as Chopping Mall, Deathstalker II, Not of this Earth, The Return of the Swamp Thing, Dinosaur Island and Dinocroc vs. Supergator.

For more information about Nic Brown: