Podcast Episode 20: His Own Take on Storytelling 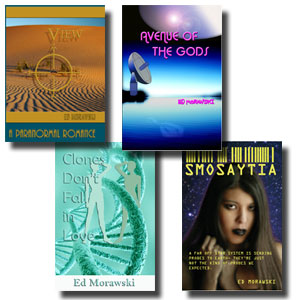 In which Carma Spence, The Genre Traveler, converses with author Ed Morawski. A U.S. Air Force veteran, serving eight years in locations as diverse as California and Vietnam, Ed is an expert in electronic security with more than 35 years experience in the industry. The conversation covers his books — View, A Paranormal Romance; Avenue of the Gods, an alien invasion tale, and Clones Don’t Fall in Love — as well as dreams as inspiration for stories, writing from a “real life” first-person perspective, rebelling against traditional rules in telling a story, sacrifices and missing people.

The Tale of the Body Thief
This is the book in The Vampire Chronicles series that introduced Lestat’s dog.

For more information about Ed Morawski: