From now until April 23, you can see the Tutankhamun and the Golden Age of the Pharaohs at the Museum of Art in Fort Lauderdale. More than 130 rare items and artifacts associated with the famous boy king are on display for the first time in the U.S. in nearly 30 years. 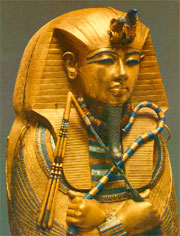 “People of all ages have an enduring connection and fascination for Tutankhamun,” said Zahi Hawass, secretary general of Egypt’s Supreme Council of Antiquities and director of the Giza and Saqqara Pyramids. “Now a new generation will discover the wonders of the pharaohs and ancient Egypt.”

The exhibit is organized into galleries with specific themes, such as “Daily Life in Ancient Egypt,” “Traditional Religion,” “Death, Burial and the Afterlife.” The final galleries are where King Tut’s treasures are featured, including a gallery dedicated to five items that were found on the Pharaoh’s body when Howard Carter entered the tomb in 1922. The room also includes the visual effect of superimposed items on a projection of Tut’s body to depict where they were positioned when the coffin was opened. All of the treasures in the exhibit are between 3,300 and 3,500 years old.

The final gallery of the exhibition features scans of Tut’s mummy that were obtained as part of a landmark, five-year Egyptian research and conservation project, partially funded by National Geographic, that will CT-scan the ancient mummies of Egypt. The scans were captured through the use of a portable CT scanner, donated by Siemens Medical Solutions, which allowed researchers to see through the mummy’s wrappings and compile the first three-dimensional picture of Tutankhamun, which also is on display.

Some of the items in this exhibit were on display almost 25 years ago when The Treasures of Tutankhamun toured the U.S. However, more than 100 objects have never been seen in the U.S. before. I was fortunate to see this when it was in San Francisco. It was interesting — lots of images of King Tut and members of the Egyptian pantheon of gods and goddesses, items of gold, alabaster and lapis.

Tickets are sold by the hour and the exhibit opens at 9a.m. You should arrive 30 minutes before your scheduled admittance time. Visits last about an hour and a half.

Go to www.sunny.org/tut to enter for a chance to win two tickets to the Tut exhibition in Fort Lauderdale plus roundtrip Spirit airline tickets, USA Transportation sedan transfers and a two-night hotel stay at The Atlantic beachfront resort. You can also purchase tickets from a link at this site.

This is the second of four venues the exhibit will be coming to during its U.S. tour. Organized by National Geographic, AEG Exhibitions and Arts and Exhibitions International, with cooperation from the Egyptian Supreme Council of Antiquities, the exhibition can be seen at The Field Museum in Chicago starting in May 2006 and then at The Franklin Institute in Philadelphia in February 2007.