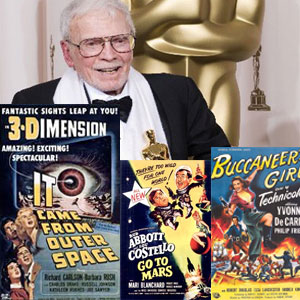 Iconic Production Designer Robert F. Boyle, a four-time Academy Award nominee for Art Direction for his work on North by Northwest, Gaily, Gaily, The Shootist and Fiddler on the Roof and recipient of an Honorary Oscar in 2008 for his work on these and more than 86 other motion pictures, died Sunday of natural causes after a two-day stay at Cedars Sinai Hospital. He was 100.

Boyle worked as art director on several genre films including Buccaneer’s Girl (1950) starring Yvonne De Carlo, Abbott and Costello Go to Mars (1953) and It Came from Outer Space (1953) based on a Ray Bradbury story. And was production designer on Afred Hitchcock‘s The Birds and North by Northwest (which spawned many a modern spy movie).

In 1997 Boyle was voted a Lifetime Achievement Award by the Art Directors Guild. In 2001 he was further honored with the Hollywood Production Designer of the Year Award by the Hollywood Film Festival. Recently he was given a tribute by the American Cinematheque and the Art Directors Guild with a screening at the Egyptian Theatre of two of his designed films, The Wolf Man (1941) starring Lon Chaney Jr. – he was associate art director – and Gaily, Gaily (1969), a Norman Jewison comedy on which he was production designer. In 1973 he was nominated for an Emmy for The Red Pony.

Boyle worked on numerous films for Alfred Hitchcock and Norman Jewison as well as for such other famed directors as Tom Mankiewicz, Penny Marshall, Joe Dante, Sylvester Stallone, Hal Ashby, Arthur Hiller and Don Siegel. Until he was hospitalized he was a Distinguished Lecturer at the American Film Institute Conservatory in Los Angeles where he was considered the “guiding light” of the Instituteâ€™s production design department.

Boyle is the subject of Daniel Raimâ€™s Oscar-nominated documentary, The Man On Lincolnâ€™s Nose (2000), which refers to Hitchcockâ€™s North By Northwest film that Boyle designed. He also is a prominent subject in Raim’s newest documentary about Production Designers, Somethingâ€™s Gonna Live, that includes participation by three other deceased production designers, Henry Bumstead (art director on 1958’s I Married a Monster from Outer Space), Albert Nozaki (art director on 1964’s Robinson Crusoe on Mars) and Harold Michelson (art director on Mel Brook’s Spaceballs).

Robert Boyle was born October 10, 1909, in Los Angeles and was a graduate of the School of Architecture of the University of Southern California (1933). He began his art direction career that year at Paramount Studios moving from there to Universal Studios. In 1941 Hitchcock chose him to be the art director on his Saboteur film. He served as a member of the Board of Governors of the Academy of Motion Picture Arts & Sciences for nine years and was a two-term president of the Art Directors Guild.

Boyle is survived by two daughters: Emily Boyle-Biddle of Hollywood, CA, and Susan Licon of Toledo, Oregon, and three grandchildren.