Another Step Toward the Holodeck Open Now at Universal Studios Japan

Home | 1. Science Fiction • Attractions | Another Step Toward the Holode … 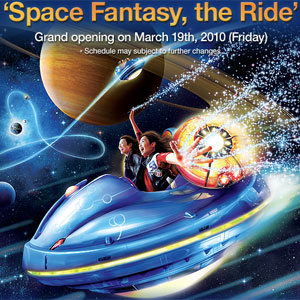 How It Works
3D cameras scan the surrounding environment and detect movement. “Our immersive gesture control systems are the inspiration for the technology behind Kinect, so it’s fitting that GestureTek has taken this capability from the home to the public,” said Vincent. Kinect is a “controller-free gaming and entertainment experience” by Microsoft for the Xbox 360 video game platform. GestureTek’s award winning interactive gesture-control technology was used in two different parts of the attraction.

The Experience
The premise of the Space Fantasy ride is the impending death of the sun. In the pre-ride area, the technology is used to allow space entities to engage passers-by, reacting to the riders’ movements and gestures. On the actual ride, GestureTek’s touch-free multi-touch interface adds a collaborative element to the rider experience, so that guests can interact together with on-screen elements while working toward a common goal.

As part of the ride, GestureTek’s multi-touch software and custom-designed camera array powers an interactive experience where, for the first time ever, riders can control content on the screens around them, simply by gesturing with their arms.