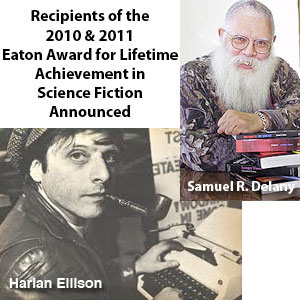 Samuel R. Delany and Harlan Ellison join Ray Bradbury and Frederik Pohl as recipients of the Eaton Award for Lifetime Achievement in Science Fiction, presented by the University of California, Riverside.

“As the first major African-American science fiction writer, Delany enlarged the borders of the field during the 1960s and 1970s,” said Rob Latham, associate professor of English and co-organizer of the 2011 Eaton Science Fiction Conference, where the award is presented. His challenging and visionary novels include The Einstein Intersection and Dhalgren.

“During the same period,” continued Latham, “Ellison’s brilliant short fiction, including such classics as Ã¢â‚¬ËœRepent, Harlequin! Said the Ticktockman‘ and Ã¢â‚¬ËœThe Deathbird,’ brought an unparalleled energy and ambitious literary sensibility to the genre.”

Delany is the 2010 recipient and Ellison will accept the 2011 award during the conference in February. Delany and Ellison are two of the most important science fiction writers of the past half-century, said Latham, and are also among the most celebrated of modern science fiction writers, having won numerous Hugo and Nebula awards for their fiction. “We’re delighted to be able to add the Eaton Lifetime Achievement Award to their impressive list of honors.”

The Eaton Award for Lifetime Achievement in Science Fiction recognizes outstanding authors for their body of work. Science fiction icons Ray Bradbury, author of more than 500 published works including The Martian Chronicles and Fahrenheit 451, and Frederik Pohl, author of such classics as The Space Merchants and Gateway, were the first and second recipients in 2008 and 2009, respectively.

“In Delany’s hands, science fiction became an instrument for investigating cultural difference, extrapolating futuristic or alien worlds in which questions of identity emerge as paramount,” Latham said. He was one of the most important young science fiction writers to emerge in the U.S. in the early 1960s, publishing his first novel, The Jewels of Aptor, in 1962 at the age of 20. By 1965 he had published five books.

“Since he was black, gay and an avid participant in the youth counterculture, Delany had a strong personal interest in such issues,” said Latham. “His work often features outsiders or mavericks who do not fit into neat social categories and who, as a result, undertake intricate, often ambiguous quests to discover themselves and their worlds.”

Ellison is probably the most-honored writer of modern science fiction short stories, having won three Nebula awards, a Grand Master laureate and eight and a half Hugo Awards for eight different stories. He is the third most anthologized science fiction writer behind Ray Bradbury and Isaac Asimov, and was a key player in the development of New Wave science fiction in the 1960s.

Ellison’s legendary pugnacity has been marshaled in support of estimable causes Ã¢â‚¬â€œ he has battled for civil rights and authors’ rights Ã¢â‚¬â€œ showing enormous personal and professional courage in the process, Latham said. “Early in his career, he often struggled with editors who casually altered or censored his work; as a result, his path-breaking anthologies Dangerous Visions and Again, Dangerous Visions were designed to give SF writers a showcase for their most challenging material,” he said. “These taboo-shattering books, and Ellison’s own bold and flamboyant fictions, showed his commitment to the enduring values of individual autonomy and unfettered self-expression.”

Ellison wrote the original script for the popular Star Trek episode, “The City on the Edge of Forever” which featured a young Joan Collins. However, the script was radically altered from Ellison’s original vision and has been a sore spot for him for many years.

Are You a University of California Student?

In addition to recognizing recipients of the Eaton Lifetime Achievement Award, winners of the annual UC student short-story contest will be announced at the conference. Writers must be full-time UC students. The deadline for contest submissions is Oct. 8. Details about submitting entries are available at eatonconference.ucr.edu/2011/contest.php.

Event At A Glance

What:
The Eaton Conference

How Much:
Admission to the symposium is free. Registration for the Eaton Conference is $135 or $70 for a single day if made by Sept. 15.