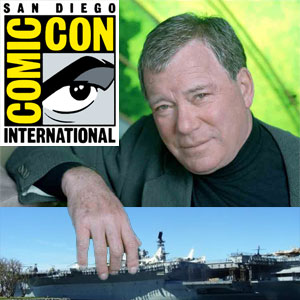 William Shatner‘s latest venture is a social network for science fiction fans called MyOuterSpace.com. To help promote it, he’ll be soaring over San Diego Harbor in a helicopter tonight and landing on the deck of the USS Midway Aircraft Carrier at Comic Con.

If you aren’t going to be at the Con tonight, you can watch the event live via webcast at myouterspace.com at 7:30 PST.

Although there was a soft launch for the website about a month ago … that’s when I joined … look me up … I’m CarmaP, there will also an official launch held at the Tweet House on the USS Midway from 7:30pm-9:30pm PST tonight.

As a part of the event, Shatner will be interviewing other celebrity guests and industry professionals.

“I am excited about the possibilities that are happening at Comic Con,” said Shatner. “The brand new platform for creativity in film, in gaming, and in animation is now coming alive on Myouterspace.com. With Tweet House on the USS Midway, and a great team of partners, can you get more with it?”

Myouterspace.com is dedicated to providing fans with amazing content, while connecting talented users with creative opportunities in music, graphic design, entertainment, acting, film production, and writing. The network generates Sci-Fi projects for film, television and the web by allowing registered users to participate alongside industry professionals and connect with other users in the business.

Shatner is the host of the website and engages with the online community by creating video messages to fans, overseeing feature productions, providing his professional critique to users, and promoting Myouterspace.com on Twitter, Facebook, and major media outlets.