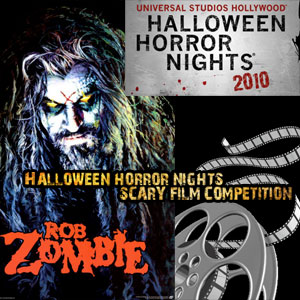 Universal Studios HollywoodSM and Rob Zombie are partnering to recognize the nation’s top short-form filmmaking horror genre talent with the “Halloween Horror Nights – Rob Zombie Film Competition.” If you think your short horror film has what it takes, enter in your scariest short film for a chance to win a premiere showing on Chiller TV, a posting on SyFy.com, a $1,000 cash prize and a trip for two to the opening night of Halloween Horror Nights at Universal Studios Hollywood.

Entries are being accepted through August 14, 2010 … so you better hurry! To enter, submit short films from 90 seconds to three minutes in length on DVD (two copies of each film must be submitted). Selected films will be judged by Rob Zombie, members of Universal Studios Hollywood’s “Halloween Horror Nights” team and horror industry professionals.

What makes a good short horror film for this contest? Criteria will be storytelling skill, originality and the degree of a “good scare.” The top 10 shorts will be posted online at Halloween Horror Nights from September 3 – 17, 2010, for public voting.

The winning film will be announced on September 17. In addition to the prize and the broadcast of the film, the winning filmmaker will be honored in front of celebrities, studio executives and media at the Eyegore Awards ceremony, which will kick off the 2010 Halloween Horror Nights event at Universal Studios Hollywood.

Entries should be sent to “Halloween Horror Nights-Rob Zombie Film Competition,” 100 Universal City Plaza, Building 5511, 100 Universal City CA 91608. Additional information on the contest, including a complete list of rules and regulations, is available online at http://www.halloweenhorrornights.com/hollywood/film_contest.html.

I can’t imagine you’ve never heard of Rob Zombie if you’re at this website. But, just in case, here’s a little info:

Rob Zombie has sold 15 million albums to date and is a seven-time Grammy nominee. He is also the writer and director of 5 full-length feature films, including the critically acclaimed cult favorite The Devil’s Rejects (2005), the blockbuster re-imagining of John Carpenters classic, Halloween (2007), and its successful follow up, Halloween II (2009). Zombie’s latest release, “Hellbilly Deluxe 2,” is in stores now and you can catch him on tour headlining the Rockstar Mayhem Festival this Summer.