Carl Sagan Gets His Day 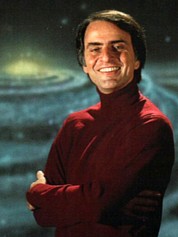 It now feels like billions and billions of years ago, but when I was 15 I received one of the best birthday presents. But the story doesn’t start there.

You see, back then I was an avid Cosmos fan … pleading with my Dad to let me stay up to watch an entire episode of Cosmos. It aired from 8 to 9pm and my bedtime was 8:30pm.

Sometime before my birthday, my father got a box of books from the History Book Club. I followed him to his room to help him unpack. He quickly whisked me away.

Well, that was peculiar. He’d never been like that before. So I snuck back into his room a few days later when he was gone to find out what he was hiding. (Yes, Dad, if you’re reading this, I was sneaky.)

Anyway, when I was Carl Sagan’s Cosmos on the shelf in his closet, I was beside myself with joy. I so much wanted that book! And, I believe, I was a pretty good actress when I finally received it on my 15th birthday. 🙂

So why am I telling you all this? Because I got an email recently from the Center for Inquiry that brought all those memories right up. The email announced the First Annual Carl Sagan Day.

Here are the particulars:

What:
Carl Sagan Day: A Celebration of Astronomy

This event celebrates Sagan’s legacy on the 75th anniversary of his birth (Nov. 9, 1934). He died in December 1996. In life, he was a Professor of Astronomy and Space Science and Director of the Laboratory for Planetary Studies at Cornell University. He served as an advisor and consultant to NASA and played a major role in the establishment of SETI (Search for Extraterrestrial Intelligence).

A Pulitzer Prize-winning author, Sagan is most well known for his Cosmos series on PBS, which has now been broadcast in more than 60 countries and seen by more than 500 million people. In addition to numerous awards, recognitions, and honorary degrees for his outstanding contributions to science, Sagan is acknowledged as one of the most effective public faces of astronomy and space science throughout the world.

I wrote a letter to him once, back in the Cosmos days … I was thinking about becoming an astronomer. I received a response from a women (I don’t remember who, but it very well could have been Ann Druyan), encouraging me to pursue science. Of course, by then I had moved on and was looking into animal training or cetacean research. (Yes, I am a geek … and damn proud of it!).

This event will be filled with fun and interesting activities, including:

And best yet … the event is FREE! For more information, visit www.carlsaganday.org. If you go, please let me know what it was like by posting a comment to this post. I really wish I could be there!