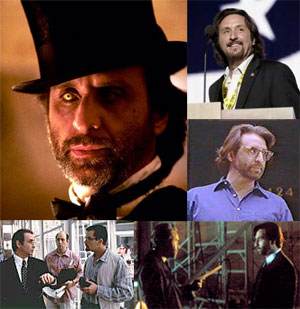 “Ron Silver died peacefully in his sleep with his family around him early Sunday morning” in New York City, Robin Bronk, executive director of the Creative Coalition, which Silver helped found, told the Associated Press. “He had been fighting esophageal cancer for two years.”

I noticed the news because I’ve always kinda had a crush on the guy. Those brown eyes …

Born in New York City, Silver made his film debut in Tunnel Vision (1976), a comedy anthology that also featured Chevy Chase, John Candy and Al Franken, among others.

Having received a Master’s Degree in Chinese History from St. John’s University in New York and the College of Chinese Culture in Taiwan, Silver spoke fluent Mandarin Chinese, as well as Spanish. He taught at the high school level and was a social worker for the Department of Social Services. A Democrat for many years, he became an outspoken supporter for President George W. Bush after the 9/11 attacks.