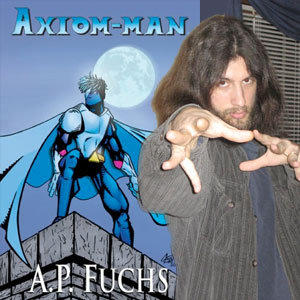 This week I chat with Canadian author A.P. Fuchs. Along the journey we talk about how he got into writing genre fare, how he became a publisher, the genesis and evolution of the Axiom Man superhero series, superheroes as a metaphor, zombies as the ultimate super-villains, zombies as metaphors, and more.

Note: There was a problem with the quality of A.P.’s vocals. I cleaned it up as best I could, but there are still some rough patches.

Bruce Lee
Lee, who makes an appearance in A.P.’s Zombie Fight Night, was a Chinese American, Hong Kong actor, martial arts instructor, philosopher, film director, film producer, screenwriter, and founder of the Jeet Kune Do martial arts movement (according to Wikipedia). He was born in San Francisco, but raised in Hong Kong until his late teens, when he emigrated to the U.S. to claim citizenship and go to college. A cultural icon, he is considered by many to be the most influential martial artist to date.

For more information about A.P. Fuchs: