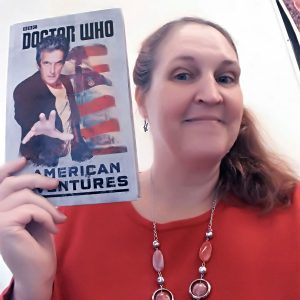 Written for readers aged 9-12, this collection of new adventures set in the United States pits the 12th doctor against aliens, robots and alien technology attempting to muck up history.

This anthology contains six tales set in the United States in the years 1815, 1846, 1849, 1902, 1944 and 2017. Some are told from a American character’s point of view, others from the Doctor’s. Each story invokes the science fiction and humor aspects fans of the TV show have grown to love.

The stories felt like Doctor Who. I’ve been watching episodes from each of the doctors and could easily see these stories being brought to the TV screen. The voice of the Doctor was consistent with what I’ve seen of Capaldi’s performances, while also calling forth moments of Hartnell, Pertwee and Baker.

Although written for a young audience, ages 9 through 12, adults could easily enjoy reading these, as well. I know I did! And, as appropriate for the age group they were written for, the content didn’t have any content I think a parent would object to. Protagonists ranged in age and gender, so both both girl and boy fans of the Doctor will enjoy these stories.

Sometimes the stories seemed to wrap up too quickly, although that may be from an adult perspective and not that of the target reader.

This book will make a great gift for Doctor Who fans young and old. And, if you’ve got a special child in your life that you want to introduce to the world of Doctor
Who, this book could be a good choice. I thoroughly enjoyed reading this book, and because it was intended for young audiences, I breezed through it in only six days! (I’m a slow reader — and I was hiding it from the person I gave it to as a gift!)

Just one note for American readers: The text uses British English, which people who aren’t used to that sort of thing, might find mildly confusing at times.

Score: 5 Palm Trees Out of 5 Possible