Review: Chronicles of the Ghostly Tribe 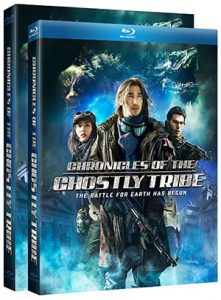 The 2015 Chinese adventure action film, Chronicles of the Ghostly Tribe, is being released in DVD and Blu-Ray this coming week. Based on the 2006 best-selling novel Ghost Blows Out the Light by Tianxia Bachang, it tells a supernatural story with touches of fantasy and science fiction.

Summary
Hu Bayi is working in a government excavation site when an explosion changes everything. The cave that was being explored has opened up “new space” in the mountain. When the nurse he feels a strong connection with volunteers to be part of the expedition to explore the cave, he does too.

This leads him on an adventure to the Devil’s Pagoda, travels through time and space, and run-ins with firebats, aliens and the mysterious Mr. Wong.

What Worked for Me
The imagery is stunning. The special effects are engaging. The movie is quite a spectacle to watch. The story also kept you guessing. Things were never quite what they seemed, and like so many other Asian films I’ve seen, you don’t really know what’s going on until one of the characters lets you in on the back story.

What Didn’t Work for Me
First, as a caveat, due to an accident a few months back, I don’t have a working pair of glasses, so I had to sit very close to the TV to read the subtitles. This may have contributed to my being a little lost through most of the film.

Chronicles of the Ghostly Tribe is available in Mandarin with English subtitles, which is usually my preferred way of watching foreign films. But if I can’t read them, they don’t help. I would have appreciated a dubbed version for that reason alone.

Also, the story telling left me guessing for too long. It made me antsy. I would have like to have been let in on the secrets a little earlier that provided.

Recommendation
If you enjoy action, adventure and beautiful, cinematic imagery, you might just enjoy this film. The movie had an almost Indianna Jones feel. Just be sure you’re in the mood — and prepared — for a subtitled, non-English film.