Podcast Episode 57: From RoboCop to the Apocalypse 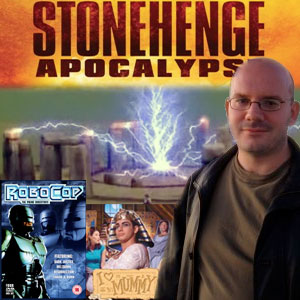 In this episode, I chat with screenwriter Brad Abraham, whose credits include the SyFy movie Stonehenge Apocalypse, the TV miniseries Robocop: Prime Directives and the TV series I Love Mummy. Our conversation touches on the inspiration for Stonehenge Apocalypse, the formula for a SyFy movie of the week, suspending disbelief, respecting the audience, the rise of apocalyptic stories, zombies, Robocop: Prime Directives, writing for Rue Morgue magazine, writing movie reviews, and more.

Stonehenge Apocalypse is a made-for-TV science fiction movie starring Misha Collins (Supernatural), Torri Higginson (Stargate Atlantis) and Peter Wingfield (Sanctuary). Collins plays Jacob Glaser, a disgraced scientist and underground pseudo-science radio talk show host. After a series of strange occurrences, he discovers that Stonehenge is part of an ancient terraforming machine and must convince fellow scientists and the military before it is too late and all life on Earth is destroyed. Today’s guest, Brad Abraham, wrote the script from this basic concept: Stonehenge is a clock. The pyramids are bombs. And the clock is ticking.

Best known for his role as the angel Castiel on the CW hit series Supernatural, Misha Collins is an American actor, producer and poet. He also won, by popular vote, the award for Best of Twitter 2009 in an only contest held by Faxo. His genre credits include guest spots on Charmed and Seven Days, as well as starring in Stonehenge Apocalypse. He also played serial killer Paul Bernardo in Karla.

Hosted by Leonard Nimoy (Star Trek), this documentary TV series took an uncritical look at mysteries, strange phenomena and the paranormal. It was a spin off of two successful one-hour TV documentaries, In Search of Ancient Astronauts in 1973 (based on the book Chariots of the Gods by Erich von Daniken),

and In Search of Ancient Mysteries & The Outer Space Connection in 1975. Rod Serling narrated these shows and was the initial choice to host the series. When he died, Nimoy was chosen. When he left the show, Sharron Miller, the first woman ever to win the coveted Directors Guild of America Award for directing drama, took his place.

Created by screenwriter Chris Carter, The X-Files aired on the Fox network and starred David Duchovny as Fox Mulder and Gillian Anderson as Dana Scully, FBI agents who investigated unsolved paranormal phenomena. Mulder was the “believer” and Scully was the “skeptic.” The show featured both “monster of the week” stand alone episodes, as well as story-arc episodes that developed and built on the show’s mythology.

Named after the defunct burlesque theaters once located on 42nd Street in New York, grindhouse is an American term for a theater that showed primarily exploitation films. These type of films often contained a lot of sex, violence and bizarre subject matter. The grindhouse films grew in the 1970s, but home video and cable pretty much marked their doom in the 1980s. In 2007, Quentin Tarantino and Robert Rodriguez released a double feature, Planet Terror and Death Proof, marketed as Grindhouse, in homage to this era in cinema.

This 2005 Sci Fi Pictures original film, also known as Mosquitoman, stars Corin Nemec (The Stand, Stargate SG-1), Musetta Vander (Planet Raptor, Tanslymania) and Matt Jordan (It Waits, Cavemen). Conceived by Ray Cannella, manager of Program Acquisition for the Sci Fy Channel, it shares many similarities with the 1986 adaptation of The Fly. Vander plays a scientist experimenting with mosquitoes in an effort to find a cure for a disease. Jordan is a convict who volunteers as a guinea pig in exchange for his life prison sentence. When an accident exposes them both to radiated mosquitoes, they find themselves transforming into a cross between mosquito and human. Nemec plays Vander’s love interest.

This Roland Emmerich disaster film plays on the idea that the Mayan calendar ending in 2012 means the end of the world. It starred John Cusack (Being John Malkovich, Hot Tub Time Machine) as a science fiction writer and part-time limo driver trying to save his family when all hell breaks loose and the world starts coming to an end. Emmerich told USA Today that this film will be his last involving disasters.

This alien invasion film was written directed by Roland Emmerich and co-written by Dean Devlin. The film was highly anticipated and, at one point, held the record for second-highest worldwide gross of all-time. It was at the forefront of the resurgence of disaster films that started coming out in the mid-1990s and won an Academy Award for Visual Effects. Cast included Will Smith (Men in Black, I Am Legend), Jeff Goldblum (The Fly, Invasion of the Body Snatchers), Bill Pullman (Casper, Scary Movie 4), Mary McDonnell (Battlestar Galactica, Donnie Darko).

This American film producer, director and actor has spent most of his career working on low-budget B movies, although some of his work has won awards. He has mentored many directors that have gone on to become well known, such as Francis Ford Coppola (Peggy Sue Got Married, Bram Stoker’s Dracula), Martin Scorsese (Shutter Island, Cape Fear), Ron Howard (Splash, Cocoon), James Cameron (The Terminator, Avatar) and many others. He also helped launch the careers of many actors, such as Jack Nicholson (The Shining, Wolf), William Shatner (Star Trek, TekWar) and Robert De Niro (Brazil, Angel Heart).

The Carnosaur Series
The first Carnosaur movie came out in 1993, two weeks before the blockbuster film Jurassic Park, and starred Dianne Ladd as a mad scientist who plotted to destroy humanity and recreate the dinosaurs. It was loosely based on the novel of the same name by John Brosnan, but was more similar to Jurassic Park.

Carnosaur had a limited theatrical release and spawned two direct-to-video sequels. Carnosaur 2 pitted a group of technicians against escaped dinosaurs from the first film, which had been transported to a nuclear dump site. Carnosaur 3: Primal Species had a military team attempting to contain the dinosaurs when a group of international terrorists accidentally set them free.

Stock footage from all three films was recycled for the 2001 film, Raptor, as well as the 2006 film The Eden Formula.

As of today, these are the books in my review queue that deal with zombies:

Loosely based on P.D. James’ 1992 novel The Children of Men, this American-British science fiction film is set in 2027, after 20 years of human infertility has brought society to the brink of collapse. Clive Owen (King Arthur, Sin City) plays a civil servant who helps a pregnant West African refuge escape the chaos to a place that will be safer for her child. It was nominated for three Academy Awards, won two British Academy Film Awards and received the Saturn Award for Best Science Fiction Film.

This 2006 novel by Max Brooks is a follow up to his 2003 book, The Zombie Survival Guide. It is a collection of individual accounts, all in first person, charting a 10-year war against zombies. These anecdotes show the changing religious, geo-political and environmental aftermath of the Zombie War. The novel was inspired by The Good War by Studs Terkel, as well as the zombie films of George Romero. A film based on the book is currently in production and is scheduled for a 2012 release.

In 1987, Paul Verhoeven released this futuristic, dystopic crime story about a Detroit cop (Peter Weller) who dies, brutally, in the line of duty and is resurrected as a cyborg police enforcer. This gritty, violent film commented on themes such as the media, gentrification, corruption, privatization, capitalism and human nature. The film spawned two sequels, a television series, two animated TV series, Brad’s TV mini-series, video games, two comic book adaptations and quite a bit of merchandise.

This action crime film was directed by John Woo and starred Chow Yun-Fan as an assassin, Ah Jong, who accidentally damages the eyes of a young nightclub singer, Jennie, during a shootout. If Jennie does not have an expensive operation soon, she will go blind. So Jong decides to do one last hit to raise the funds for the operation. Woo has described the film as being about “honour and friendship” and as a “romantic poem.” The Killer has had an important influence on Western and Asian films alike. Such movies as Nikita, directed by Luc Besson; El Mariachi, directed by Robert Rodriguez; and Jackie Brown, directed by Quentin Tarantino, were influenced by The Killer.

This American martial arts film starred Jean-Claude Van Damme as Frank Dux, a Canadian who, since childhood, was trained in the ways of Ninjutsu by Senzo Tanaka, a Japanese master of the art. It was successful enough to spawn three direct-to-video sequels (sans Van Damme), Bloodsport II: The Next Kumite in 1996, Bloodsport III in 1997 and Bloodsport 4: The Dark Kumite in 1999. The the sequels, Daniel Bernhardt (Future War, The Matrix Reloaded) played the lead, a thief named Alex Cardo.

For more information about Brad Abraham: