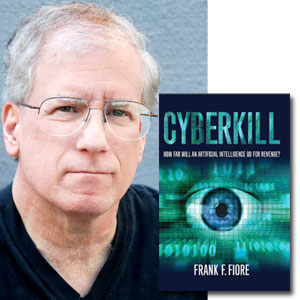 In Episode 10, best-selling author Frank Fiore and I chat about his novel, Cyberkill. During the conversation we tackle such questions as: Can artificial intelligence become self aware? If it did become self aware, would it be more analytical like Spock or emotional like McCoy? What does it mean to be human? Can you improve humankind by removing all the negative traits? Could a “perfect being” ever exist in the physical plane?

You can listen to a snippet here: www.youtube.com/watch?v=2xoYJoU6iD0

The Second Self: Computers and the Human Spirit by Sherry Turkle

The Three Laws of Robotics, developed by Isaac Asimov for his robot stories, are mentioned in this episode of The Genre Traveler Podcast. For those who may not be familiar with what they are, here you go:

2. A robot must obey any orders given to it by human beings, except where such orders would conflict with the First Law.

3. A robot must protect its own existence as long as such protection does not conflict with the First or Second Law.

For more information about Frank Fiore:

Cyberkill is available in both paperback and Kindle editions: