July has quite a few genre films to offer, so I think you’ll be able to get out of the heat quite often without having to see a film more than once. 😉 The trailers for The Sorcerer’s Apprentice look really cool and I’ve always found Nick Cage’s film to be fun, so I’m looking forward to that one. 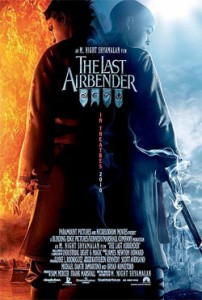 Based on the first season of the animated television series, Avatar: The Last Airbender, this film tells the tale of a reluctant hero who prefers adventure over his job as the Avatar. Directed by M. Night Shyamalan and set in an imaginary world heavily influenced by Asian art, mythology and various martial arts fighting styles, The Last Airbender is the first in a planned trilogy of films produced by Paramount Pictures and Nickelodeon Movies.

Newcomer Noah Ringer, who has recently signed to appear in Jon Favreau‘s Cowboys & Aliens, stars as 12-year-old Aang, the last of the Air Nomads (Airbenders), on whose shoulder the salvation of the war-torn world. If you want to learn more about this particular universe, I recommend Wikipedia, which has a decent synopsis, as well as IMDB.

Of course, M. Night is no stranger to genre film with titles such as The Six Sense, Unbreakable and Signs under his belt. But that’s not the only genre celebrity you’ll find attached to this film. Jackson Rathbone (the Twilight movies), Cliff Curtis (Sunshine, Deep Rising, Virus, 10,000 BC) and Shaun Toub (Stigmata, Iron Man, and numerous genre TV appearances) are also in the cast. 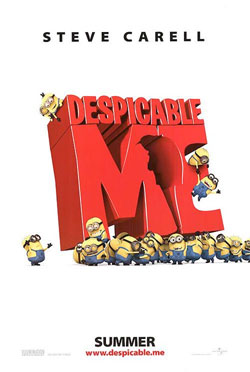 Steve Carell from the U.S. incarnation of The Office heads up the cast of this family oriented animated fantasy. He voices Gru, an evil mastermind who plans on stealing the Moon. Carell’s comedic work has included some genre fair, including Bruce Almighty and it’s sequel Evan Almighty, as well as Bewitched, Horton Hears a Who! and Get Smart!. In a related aside, his character in The 40 Year Old Virgin collected science fiction action figures.

The premise of this film looks like it might be fun: “Gru delights in all things wicked. Armed with his arsenal of shrink rays, freeze rays, and battle-ready vehicles for land and air, he vanquishes all who stand in his way – until the day he encounters the immense will of three little orphaned girls who look at him and see something that no one else has ever seen: a potential dad.”

Other genre actors in this film include Kristen Wiig (Ghost Town, How to Train Your Dragon), Jason Segel (the forthcoming Gulliver’s Travels), Will Arnett (Horton Hears a Who!, Monsters vs Aliens, G-Force) and Mindy Kaling (Night at the Museum: Battle of the Smithsonian). 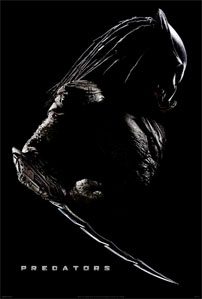 Enter another film in the Predator franchise, first started by the 1987 film Predator starring Arnold Schwarzenegger. This time a group of elite warriors have been gathered on an alien planet to serve as prey to the Predator race.

Adrian Brody (King Kong [2005], The Village, Splice) heads up the cast as Royce, the defacto leader of the cut throats recently added to the Predator game preserve. Danny Trejo (Anaconda, From Dusk Till Dawn – I, II & III, Nightstalker, The Devil’s Rejects), Alice Braga (I Am Legend, Repo Men), Topher Grace (Spider-Man 3), Derek Mears (Men in Black II, The Haunted Mansion, Cursed, Zathura: A Space Adventure, Friday the 13th, Hellbinders) round out the cast of mercenaries and convicts. Laurence Fishburne (A Nightmare on Elm Street 3: Dream Warriors, Cherry 2000, The Matrix movies) steps in as Noland, an American soldier who was brought to the planet years ago, but has managed to survive by hiding in a cave. 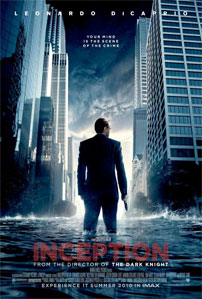 In a world where technology exists to enter the human mind through dream invasion, a single idea within one’s mind can be the most dangerous weapon or the most valuable asset.

Christopher Nolan (Batman Begins, The Prestige, The Dark Knight) directed this science fiction thriller starring Leonardo DiCaprio (Critters 3) as agent Dom Cobb, a somewhat shady individual who can drug up tycoons and enter their minds to find out their secrets and strategies … selling his services to the highest bidder. 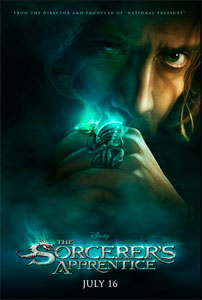 I’m looking forward to this movie not only because the trailers look cool, but because it stars some of my favorite actors, genre or otherwise.

As I mentioned earlier, I tend to enjoy the films of Nicolas Cage, whose genre credits include Peggy Sue Got Married, Vampire’s Kiss, Face/Off, the National Treasure movies, The Wicker Man, Ghost Rider and Next. In this film, he’s the sorcerer with the apprentice.

Playing opposite him in a villainous role is Alfred Molina. I’ve always enjoyed Molina’s combination of powerful presence and almost dweeb-y spineless-ness. He’s equally comfortable (and good) playing both weak and strong roles. Plus, we share a family name … I’m a Molina on my mother’s father’s side. Molina’s genre credits include Raiders of the Lost Ark, Ladyhawke, Hideaway, Species, Spider-Man 2 and this summer’s Prince of Persia: The Sands of Time.

Other faces you might recognize in this film include Monica Bellucci (Bram Stoker’s Dracula, The Matrix Reloaded, The Matrix Revolutions, The Brothers Grimm) and Alice Krige (the Borg Queen from Star Trek: First Contact). 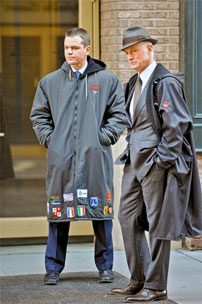 Based on the Philip K. Dick short story “Adjustment Team,” The Adjustment Bureau stars Matt Damon (Dogma, Titan A.E., The Brothers Grimm) as David Norris, a charismatic congressman who seems destined for national political stardom, but whose political future is thrown in doubt by uncontrollable events and the arrival in his life of a mysterious ballerina.

Given that P.K. Dick often dealt with issue of identity in his stories, it would not surprise me is this story had some twists, turns and unexpected outcomes in it.

NOTE: I couldn’t find a movie poster for this film, so I used this onset photograph. 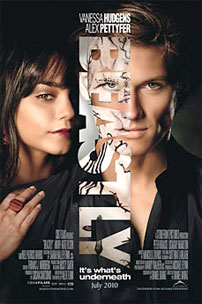 There’s just something about the tale of Beauty and the Beast that grabs us, which is why the tale is re-imagined so often. Beastly is the latest take in which a New York teen is transformed into a hideous monster in order to find true love.

The movie is based on the 2007 novel by Alex Flinn. Like so many tellings of the tale, the man who becomes beast is bewitched by a woman he has mistreated. The spell creates an outer appearance that “better matches” his inward evil leanings. Of course, the torment of his disfigurement and the eventual discovery of true love breaks the spell.

Most of the faces in this film will be fairly new to purest genre fans, but you might recognize Erik Knudsen who did a stint on the apocalyptic TV show, “Jericho,” Vanessa Hudgens from the 2004 remake of Thunderbirds and Neil Patrick Harris from Starship Troopers.