From Tieresias to Alex: An Interview with Emlyn Chand

Home | From Tieresias to Alex: An Interview with Emlyn Chand 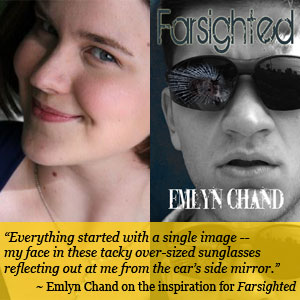 Today’s post is a little different than my usual … an experiment to see if it can fit into the overall concept that is The Genre Traveler. It is an email interview with an author, which is, in turn, a part of her blog tour.

But I’ve never done it as a part of a blog tour (although one episode of the podcast was part of a blog tour) … which I think is strange, since a blog tour is a virtual form of travel and The Genre Traveler is all about travel for science fiction, fantasy and horror fans. So here I go!

Let me introduce to you Emlyn Chand and her debut novel, Farsighted. Chand is a book marketer by trade, the founder of Novel Publicity. From an early age, she has counted books among her best friends, with which I can totally relate. She has been a writer practically from the womb, having now written two-and-a-half novels. She also leads a classics book group with more than 300 members.

Farsighted is a young adult science fiction novel about a young man named Alex Kosmitoras. Alex doesn’t have an easy life. The only other student who will talk to him is the school bully, his parents are dead-broke and insanely overprotective, and to complicate matters even more, he’s blind. Just when he thinks he’ll never have a shot at a normal life, a new girl from India moves into town. Simmi is smart, nice, and actually wants to be friends with Alex. Plus she smells like an Almond Joy bar. Right about then, Alex starts experiencing an unexpected and often embarrassing ability to “see” the future. Try as he may, Alex is unable to ignore his visions, especially when they begin to suggest that Simmi is in danger. With the help of the mysterious psychic next door and new friends who come bearing “gifts” of their own, Alex must embark on a journey to change his future.

The Genre Traveler: What inspired you to write Farsighted?

Emlyn Chand: Everything started with a single image — my face in these tacky over-sized sunglasses reflecting out at me from the car’s side mirror. I was daydreaming while my husband drove us across Michigan for my sister’s wedding. Something about my image really struck me in an almost horrific way.

I felt the glasses made me look blind but found it so weird that there was still a clear image within them; it seemed so contradictory.

At the time, my book club was reading The Odyssey, which features the blind Theban prophet, Tieresias. I started thinking about what it would be like to have non-visual visions of the future and began forming a modern Tieresias in my mind. Lo and behold, Alex Kosmitoras was born.

I didn’t want him to be alone in his psychic subculture, so I found other characters with other powers to keep him company. Thank God for my poor fashion sense!

TGT: Did you do any research for the book?

EC: I spent about three months trying to talk myself out of writing Farsighted. It’s too ambitious, my inner critic pointed out. You’ll never get it done, not in the way it deserves to be done, it pressed. But there was another part of me that couldn’t resist; I knew I had to at least try before giving up.

I started by reading tons and tons of books — I read about world folklore and superstitions, religions (especially Zoroastrianism, Hinduism and Sikhism), psychic powers, the occult, blindness and even Nostradamus. I learned how to cast runes and perform a ten-card Celtic Cross Tarot reading. I had nightmares for several weeks, but then they eventually stopped, and I started writing.

TGT: Your cast of characters has international flavor? What’s behind that choice?

EC: I don’t see why my characters all need to belong to the same culture or ethnicity. What fun is that? Culture shapes our characters in a big way, so by diversifying my cast, I was able to hit on more types of personalities and situations.

Grandon is based on my hometown; it’s small and kind of boring. I couldn’t wait to escape and move on to bigger and better things. My home town was mostly Caucasian, but somehow I ended up with a very diverse set of friends even though they made up less than 1% of the student body.

Fast forward a few years, and I end up marrying a man from India. He’s from New Delhi, like Simmi. I’ve always been fascinated by other cultures; I even decided to pursue my Master’s in Sociology for this very reason. I credit two early life influences for this attraction:

1) My adoration of A.C. Slater in Saved by the Bell,
2) Disney’s Aladdin being the best movie ever.

TGT: Do have a favorite character? Why that one?

EC: My favorite character would have to be Shapri; she’s kind of the person I wish I could have been like back then. She’s strong, always true to herself, and won’t let anyone disrespect her. Sure, she has fears, but we all do. Shapri is the kind of girl I would love to be friends with. You know she’ll always go to bat for you when you’re too tired to step up to the plate.

TGT: What is the connection to rune stones?

EC: Ooo, I’m glad you asked that! Remember how I said my Master’s degree is in Sociology? It’s actually Quantitative Sociology. I’m a numbers person as well as a word person. I love things to be organized just so. If you set a stack of papers in front of me; I’m going to fuss with them until they are lined up in a perfect stack. It’s just the way I am.

Shaping each chapter around a rune gave the story order, which made me feel happy and comfortable. Whenever I got stuck and didn’t know what should happen next, I was able to learn more about that chapter’s rune and get the inspiration I needed to continue. The runes themselves tell a story, one that is successfully completed. I felt that boded well for Farsighted.

TGT: This is the first book in a series. How many books are planned and what can readers expect next?

EC: Farsighted is a 5-book series. Each book will be told from a different character’s point-of-view, so in book #2, we’ll actually be able to see what Grandon looks like! Next up is Open Heart. I hope to have that ready by the middle of next year.

TGT: What drew you to young adult fiction?

EC: I actually just wrote a blog post about that. It all comes down to the enjoyment factor. YA is my favorite genre to read, so it’s only natural that I would choose to write it as well. I like the vulnerability and changeability of the characters. I love the ease of language and the connection that is created by writing in first person point-of-view. But mostly, I like the readers of YA. YA readers WANT to enjoy books .Their primary goal is not to dissect the literary merit of a story but rather to find a bit of entertainment. YA readers are also extremely loyal to authors they like and can border on fanatical. It makes you feel good as an author.

THE BOOK:
Alex Kosmitoras may be blind, but he can still “see” things others can’t.  When his unwanted visions of the future begin to suggest that the girl he likes could be in danger, he has no choice but to take on destiny and demand it reconsider. Get your copy today by visiting Amazon.com’s Kindle store or the eBook retailer of your choice. The paperback edition will be available on November 24 (for the author’s birthday).

THE CASH PRIZES:
Guess what? You could win a $100 Amazon gift card as part of this special blog tour. That’s right! Just leave a comment below saying something about the post you just read, and you’ll be entered into the raffle. I could win $100 too! Please help by voting for my blog in the traffic-breaker poll. To cast your vote, visit the official Farsighted blog tour page and scroll all the way to the bottom and them that The Genre Traveler sent you. Thank you for your help with that.

THE GIVEAWAYS:
Win 1 of 10 autographed copies of Farsighted before its paperback release by entering the giveaway on GoodReads. Perhaps you’d like an autographed postcard from the author; you can request one on her site.

THE AUTHOR:
Emlyn Chand has always loved to hear and tell stories, having emerged from the womb with a fountain pen grasped firmly in her left hand (true story). When she’s not writing, she runs a large book club in Ann Arbor and is the president of author PR firm, Novel Publicity. Emlyn loves to connect with readers and is available throughout the social media interweb. Visit www.emlynchand.com for more info. Don’t forget to say “hi” to her sun conure Ducky!

2 comments on “From Tieresias to Alex: An Interview with Emlyn Chand”