Podcast Episode 58: The Belle of the Ball 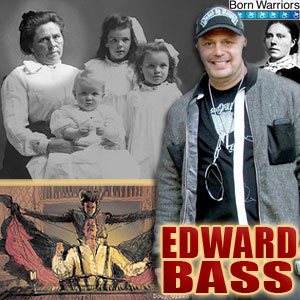 This Halloween episode features The Genre Traveler‘s conversation with Hollywood director/writer/producer and celebrity columnist Edward Bass. He has an interesting sense of humor and catches me off guard quite a few times! (Not so much because I believed what he was saying, but because he was so dead pan, I thought he might believe what he was saying!) Our chat touches on his upcoming film Belle, based on the 19th century serial killer, Belle Gunness; what drives him to do what he does; longevity; the film industry; the difference between thrillers and horror; and more.

“A film that’s so bad, it went straight to radio.”
~ Edward Bass

This Norwegian-American serial killer, is known to have killed most of her suitors and boyfriends, as well as her two daughters, Myrtle and Lucy. She is also suspected of killing both of her husbands and all of her children. Motives for these killings seemed to be collecting life insurance, cash or other valuables, and eliminating witnesses. It is estimated that she killed between 25 and 40 people over the course of several decades.

In this biographical crime drama, Charlize Theron portrays serial killer Aileen Wuornos, a former prostitute who was executed in Florida in 2002 for killing six men … a seventh murder was not brought to court. The killings took place in the late 1980s and the early 1990s. In the film, Christina Ricci plays her fictionalized lover, Selby Wall, who was based on Wuornos’ real lover, Tyria Moore. Theron won 17 awards for her work on this film, including the Academy and Golden Globe awards for Best Actress.

This organization, established by today’s guest, Edward Bass, is a network for people in the film industry who have disabilities. For more information, visit their website at www.bornwarriors.org.

This New Zealand screenwriter, producer and director often uses a science fiction or fantasy lens to comment on societal and political issues. He wrote and directed Gattaca and S1mOne, wrote and co-produced The Truman Show, and is the writer, producer and director of In Time, which is currently in theaters. Gattaca (1997) focused on genetic discrimination, S1mOne (2002) comments on virtual actors, and In Time (2011) explores the effects increasing longevity might have on society.

Every Sperm Is Sacred

This musical sketch appeared in the movie Monty Python’s The Meaning of Life and is a satire of Catholic teachings on reproduction. Michael Palin and Terry Jones wrote the lyrics; Andre Jaquemin and Dave Howman wrote the music. The, released on the album Monty Python Sings, was nominated for a BAFTA Music Award for Best Original Song in a Film in 1983.

Starring Dennis Quaid as a human and Louis Gossett Jr. as a reptilian alien, Enemy Mine is based on a novella of the same name by Barry B. Longyear. Directed by Wolfgang Petersen, the film focuses on an intersellar war between humans and Dracs. When Willis E. Davidge (Quaid) and Jeriba Shigan (Gossett) crash land on Fyrine IV, they have to learn to overlook their hate and work together to survive the hostile environment. The film was a critical and financial disappointment, in part due to production problems. Richard Loncraine (The Haunting of Julia, Brimstone & Treacle) was the original director. He was switched out for Petersen after production issues and management changes at the studio caused filming to stop.

Every genre fan should probably know the name of this American film director, screenwriter, film producer, video game designer and studio entrepreneur. His name has been behind some of the most successful films in science fiction, fantasy and horror, including Jaws (1975), Close Encounters of the Third Kind (1977), Raiders of the Lost Ark (1981), E.T. The Extra-Terrestrial (1982), Jurassic Park (1993), AI: Artificial Intelligence (2001), Minority Report (2002) and more.

This Alfred Hitchcock thriller shocked audiences by killing the lead character, Marion Crane (Janet Leigh), near the beginning of the film … after developing her character. From that point, the film focuses on Norman Bates (Anthony Perkins), the owner of the motel where Leigh’s character is killed. The screenplay was adapted from a Robert Bloch novel of the same name, which was loosely inspired by the crimes of serial killer Ed Gein. Psycho was remade in 1998 with comic actor Vince Vaughn portraying Norman and Anne Heche in Leigh’s former role.

For more information about Edward Bass: