Enter a world that is both familiar and new, enter the world of Debris by Joe Anderton. Meet true friends and fair-weather friends (never knowing which is which), experience betrayal of trust and discover unexpected supporters, as Tanyana learns how to navigate her world once her status, and the privileges that come with it, are taken away. 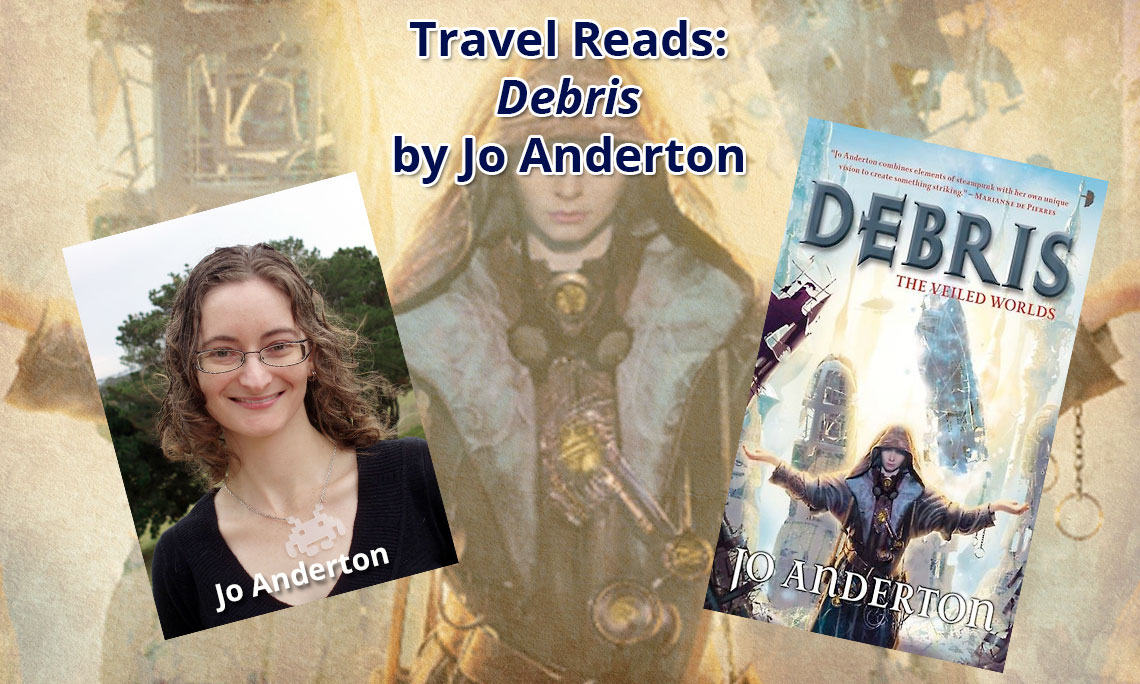 In a world where invisible, partially alive particles that only some can see (pions and debris), form the basis of all power and architecture, a woman loses everything only to discover that she is the key to the future. Jo Anderton’s debut novel, Debris, is the first book in the Veiled Worlds series, which promises to be an interesting story to follow.

Tanyana is a highly skilled quantum architect, someone who can not only see pions, but command them, too. She uses this mixture of in-born talent and skill to build great and beautiful structures. After a terrible and mysterious accident takes away her ability to call on the pions … leaving her broken and now able to see debris instead, she finds herself stripped of status and thrust into the world of debris collectors, those on the lowest rung of society.

Anderton creates a rich and intriguing world with this novel. The setting, a city called Movac-Under-Keeper, could be Chicago if it weren’t for the Steampunk-like transportation powered by pions. She uses familiar scenarios and dresses them up with the trappings of this strange new world.

Debris collectors are at once garbage collectors and firemen, being both the lowly collectors of the waste product of pions and the heroic rescue workers when there is a debris-related disaster.

Layered onto this is a couple of opposing secret societies and a history that has been buried and suppressed. Think The DaVinci Code set on another world.

The cast of characters is three dimensional and sympathetic. It is easy to relate to Tanyana, facing tough economic times with her radically lower debris collector salary, in addition to prejudice she never experienced before now that she is a lowly debris collector.

Surrounding her is a diverse group of supporting characters. The technician, Devich, who created her debris-collecting suit, who quickly becomes her lover and introduces her to parts of the high society she had never been privy to before. The cantankerous leader of her debris collecting team, Kichlan, and his “special” brother, Lad, who can find debris like no one else.

At times, the novel moved slowly … you always discovered why later, but in the moment, I found myself asking, “Where are you going with this?”

Some of the interactions between characters seemed forced. I never fully understood the motivations for their actions. Of course, this may be illuminated as the series continues.

That said, these few drawbacks are no excuse for skipping this book. I really did enjoy the read!

The world of Debris is both new and familiar, weaving magic and science, class and politics, as well as a unique and believable mythology. The cast of characters include true friends and fair-weather friends (and you’re never sure which is which), betrayal of trust and unexpected supporters. The novel concludes satisfactorily while still leaving you anticipating the next installment.

Score for Debris: 4 Palm Trees out of 5 Possible