The Los Angeles Comic Book and Science Fiction Convention, to be held Sunday, Nov. 8, 2009, features the stars of the 1969 cult classic film The Green Slime, known for it’s low budget special effects and over the top theme song.

Personally, I’ve never heard of the film, but what what caught my eye was the appearance of J. Michael Straczynski, the creator of my favorite SF TV show of all time, Babylon 5.

But that’s not why he’s featured. 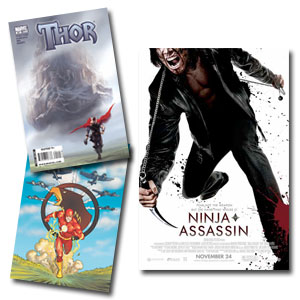 Straczynski is there because of his work in comics. He’ll begin writing DC Comics The Brave and the Bold with issue #27 and co-wrote the movie screenplay for Ninja Assassin, due out in theaters in November. He currently is writing screenplays for such movies as Lensman, Forbidden Planet, and The Silver Surfer, two of which are based on comics. He has written for Amazing Spider-Man, Thor and his own creation for Marvel Comics, The Twelve.

According to Wikipedia, Ninja Assassin was inspired by the ninja scenes featured in the Wachowskis brothers’ 2008 film Speed Racer. The Wachowskis (creators of The Matrix) were dissatisfied with the original script, and hired Straczynski to write a new draft for the film six weeks before it began production. Because of the tight turnaround required, he accomplished the task in 53 hours.