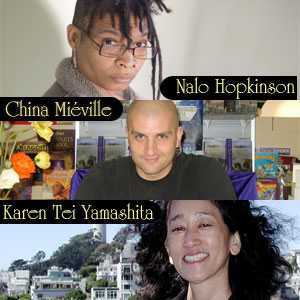 “We’ve attracted almost three times as many scholars than we’ve ever hosted,” said Melissa Conway, head of Special Collections & Archives at University of California Riverside (UCR) and co-organizer of the 2011 Eaton Science Fiction Conference. “There is greater diversity of presenters and topics,” she added.

As I mentioned in a previous post, authors Samuel Delany (Babel-17) and Harlan Ellison (“A Boy and his Dog”) will be honored at the conference with 2010 and 2011 Eaton Award for Lifetime Achievement in Science Fiction (respectively).

The three-day conference, which draws authors, scholars and fans from throughout North America and around the world, will explore global science fiction. Authors Nalo Hopkinson (Brown Girl in the Ring), China MiÃ©ville (Perdido Street Station) and Karen Tei Yamashita (I Hotel) are among the conference speakers. Other notable authors who will participate are Greg Benford (The Sunborn) and Howard Hendrix (Lightpaths). Mike Davis (City of Quartz: Excavating the Future in Los Angeles), distinguished professor of creative writing at UCR, will deliver the keynote address.

Both the Eaton Conference and symposium are open to the public. The conference is sponsored by the UCR Libraries, Special Collections & Archives, and the College of Humanities, Arts and Social Sciences.

A special pre-conference symposium will be held on Feb. 10.

Fees:
Conference:
$165 for the entire conference or $75 for a single day
Student admission is $55