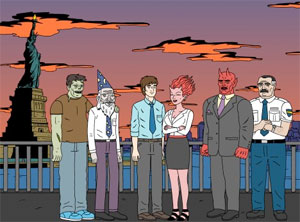 Kent Alterman, head of original programming and development at Comedy Central announced last today that the animated comedy series Ugly Americans has been renewed for a second season. The new 14-episode season will premiere in June 2011.

Developed by David M. Stern (Producer/Writer, The Simpsons) and created by Devin Clark, Ugly Americans follows Mark Lilly (voiced by Matt Oberg), a social worker at the “Department of Integration,” as he helps new citizens, both human and “other,” adapt to hectic life in New York City. There are easier tasks than weaning vampires off blood, socializing land-whales and housebreaking werewolves, but Mark is up to the challenge. Between his stressful job, a zombie roommate and a demon girlfriend, Mark’s lucky if he can sneak in a few minutes of sleep. But who can sleep when there’s a drop-dead gorgeous mermaid sitting at the bar?

Ugly Americans first premiered on March 17, 2010, with 2.1 million total viewers and has averaged 2 million total viewers over the course of its first season, which has seen the series become the second most-watched show in all television on Wednesday nights among Men 18-24, behind only its lead-in, South Park.