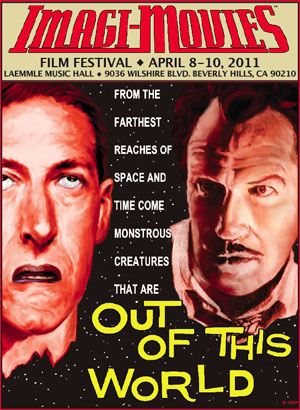 Last week, Famous Monsters of Filmland announced a change in date and venue for it’s first annual Imagi-Movies Film Festival. Instead of as originally reported, the three-day festival will now be held at the Laemmle Music Hall in Beverly Hills from April 8-10. It celebrates the legacy of Forrest J Ackerman, America’s #1 Sci-fi Fan.

Along with the independent films from the Famous Monsters Film Festival finalists, the Imagi-Movies Festival will celebrate the Vincent Price Centennial with daughter Victoria Price and the 80th anniversary of Universal’s Frankenstein and Dracula with the Lugosi and Karloff families.

In addition, the theater will feature exclusive previews for upcoming horror films such as Universal’s The Thing, a rare collection of Stephen King’s Dollar Babies exposÃ©, and a Famous Monsters and the H.P. Lovecraft Society’s compilation of Lovecraft films in honor of one of horror’s iconic writers.

Come enjoy a weekend of movies and film-making with fans and even take home some tools of the trade during live panels with some of the leading names in Hollywood.

What:
The Imagi-Movies Film Festival