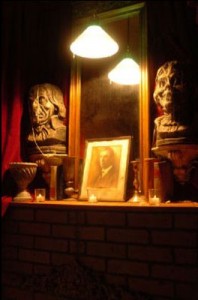 “To get started,” said founder, Tom Yaegel, “we actually purchased a franchise license from Haunted Hayrides, Inc. in Syracuse, New York. We made a land use arrangement with Stepping Stone Farm in Wycombe, Bucks County, hired 40 people, bought 8 wagons, rented 8 tractors, purchased about $7,500 in props, rubber masks and costumes, invested $20,000 in advertising and we were on our way.”

The nightly event drew over 20,000 people in its first operating season. The seasonal event has, of course, evolved over the years. When it started, it was just a franchise of a larger organization, whose spokesman was the late famed actor, Vincent Price. The year after Price died (1993), the home organization went defunct and the local franchise was then on its own.

“We relocated to the Phoenix Sports Club in Feasterville in 1996,” says Yaegel. “The Club, which is situated on over 35 acres of wooded, rolling land was in need of an annual fundraiser. They had previously tried operating their own haunted event and realized it was more complicated than they had envisioned. They invited us in and we have partnered with them ever since.”

In 2003, the name was changed to the Valley Of Fear and Original Haunted Hayride when the unique Valley Of Fear Haunted Forest Maze (it’s like a huge haunted house but you are walking through a dark woods) was added.

During the first years of the haunt, Tom’s son, Tom G. Yaegel, and daughter, Terri McKendry, helped out with some of their high school friends. Now they are an integral part of the business team.

“We now have not only the area’s best Haunted Hayride,” says McKendry, “and, not one, but two, haunted houses, plus the Valley Of Fear haunted forest maze. Before and after the haunted attractions, guests can enjoy live bands, radio personality appearances and other entertainment plus great food in Pumpkinhead’s Picnic Grove. With all that, a family or group can enjoy an entire night out during the October Halloween season.”

According to the event’s creative director, Robert Dovan, the show has evolved to add the latest in Halloween haunting and scare equipment and tactics.

“When I started with Haunted Hayrides in 1992,” says Dovan, “my first creative assignment was to improve the graveyard scene. The next year, I was given a small budget to enhance half of the trail. At that time, we added a couple of basic sound systems, strobe lights and fog and the improvements were well received as our guests had never experienced these types of entertainment basics on a night time hayride.”

“While a few pre-made masks are still in use, today,” says Dovan, “we employ four make up artists who apply professional quality make up, nightly, to over 70 actors, plus we utilize sophisticated animatronic scares, fog, sight, sound and lighting systems. On the acting side, we now have haunted fire breathers and stilt walkers.”

The Valley Of Fear is located in the woods of the Phoenix Sports Club in Feasterville, PA. For more information: http://www.valleyoffear.com.