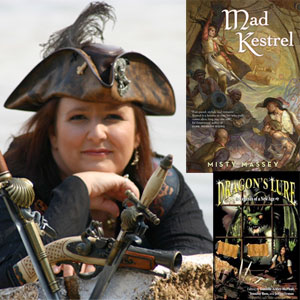 Arg matey, this week I chat with author and pirate-fan Misty Massey. Along the way we chat about her magic pirate adventure novel Mad Kestrel, pirates and piracy in general, dragons, the difference between European and Asian dragons, belly dance, and more.

This adventure novel by Scottish author Robert Louis Stevenson is a classic tale of pirates and buried treasure. First published as a book in 1883, it was originally serialized in the children’s magazine Young Folks. It is part pirate adventure and part coming-of-age story. It focuses on the adventures of young Jim Hawkins as he gets caught up in Long John Silver’s search for missing treasure. Part of what makes it unique for children’s literature (both then and now) is its wry commentary on the ambiguity of morality. It has been adapted to film several times, including retellings set in different times and, as in Treasure Planet, other worlds.

This novel by Rafael Sabatini (of Scaramouche fame), originally published in 1922, focused on the adventures of sharp-witted Dr. Peter Blood, a fictional Irish physician who was also a soldier and sailor. The story has been adapted to film several times.

The first adaptation was in 1924 and starred J. Warren Karrigan, Jean Paige and Charlotte Merriam.

In 1935 it was brought to the silver screen with Errol Flynn and Olivia deHavilland.

In 1950, Gordon Douglas directed Fortunes of Captain Blood based on the book.

In 1991 a USSR/France team produced Odyssey of Captain Blood.

There has even been an audio production and comic book series based on the work.

In the dictionary sense of the word, pirates are people, not affiliated with a government, who commit acts of robbery and/or criminal violence at sea. Privateers, were pirates authorized by their government to commit similar acts in the name of their country. They were kind of like mercenary pirates. Piracy is primarily committed at sea, although the term is sometimes used to describe similar crimes on land, in the air and, these days, over the Internet. Another term used in association with pirates is buccaneer. These were English and French privateers who attacked the Spaniards in the Caribbean Sea.

Shih Yang was popularly known as Madame Ching, as well as Ching Shih, Cheng I Sao and Hsi Kai Ching Yih. She was one of the greatest Chinese pirates who sailed the seas in the 1800s. At the height of her career she commanded approximately 2,000 ships and 50,000 pirates, and controlled the seas from Hong Kong to the Vietnamese border. She started her career as a prostitute on one of the city Canton’s floating brothels and moved into piracy when she married a notorious pirate, Zheng Yi, in 1801, when she was 16 years old. In 1810, tired of the pirate’s life, she took an amnesty offer from the Chinese government. She died in 1844 at the age of 69.

These legendary creatures with serpent- or reptile-like traits are featured in the myths of many cultures, both East and West. There are two basic types of dragon: those from Europe, which tend to be more stout and have wings, and those from Asia, which tend to be more gracile and snake-like. The two traditions evolved separately, but eventually influenced each other as the two cultures started to interact. For more on dragons, read my Examiner.com post here.

This series of books, novellas and short stories, written by Anne McCaffrey, were about a race of dragons and their human riders on a far away planet, Pern. Periodically, a mycorrhizoid (a symbiotic fungus/plant association) spore called Thread rains down on the planet. These spores are in the form of silver filaments and devour all organic matter they touch. The fiery breath of the dragons destroys them, so the dragonriders fly out during Thread fall to destroy as much of the Thread as they can before they reach the ground below. These stories are cross-genre because they incorporate elements of both fantasy and science fiction.

This series of novels by Naomi Novik is a cross between fantasy and alternate history in which the air force during the Napoleonic Wars was comprised of dragons and their human aviator crew. Temeraire is a Chinese dragon who was discovered by Captain William Laurence of the British Royal Navy. The dragons in this series are divided into different “breeds” and are both intelligent and sapient. They learn language while still in the egg and so hatch with the ability to speak.

For more information about Misty Massey: