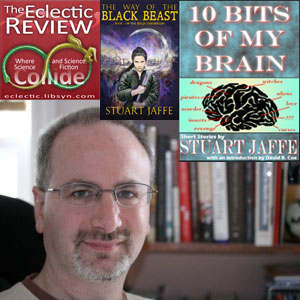 This week I chat with short story writer Stuart Jaffe. In this episode we talk about his short story collection, 10 Bits of My Brain, his podcast, The Eclectic Review, schlock films, unusual casting, his upcoming novels, genre writers in the South, what’s going on in publishing these days, and more.

Wolf Creek
This 2005 Australian horror film centers on three backpackers who are held captive by a serial killer in the Australian outback. The movie was marketed as “based on true events” and was nominated for seven Australian Film Institute awards, including Best Director. Slant Magazine included it in its 2010 list of the 100 best films of the decade.

Black Sheep
This 2007 New Zealand comedy horror film has the tagline, “Get the flock out of here!” The movie was inspired by Peter Jackson’s slapstick films Dead Alive and Bad Taste. After a couple of shocking incidents, a sheep farmer develops a crippling fear of sheep and leaves his farm. 15 years later he returns to sell the farm to his brother only to find that in his absence, his brother has been been experimenting on the sheep, turning them into voracious carnivores. And worse yet, when bitten by one of these sheep, you turn into a were-sheep.

Killer Klowns from Outer Space
This 1988 comedy horror film is about aliens that look clowns who come to Earth and harvest people for food. Their landing site looks like a carnival and they wrap the people up in what look like cotton candy cocoons. The film was shot in Watsonville and Santa Cruz, Calif., where I attended undergrad school at UC Santa Cruz. One of my coworkers at the software company I worked for did a short cameo scene as one of the killer clowns. He’s listed on the movie’s IMBD page as a Klown Performer (Michael Harrington Burris).

The Stuff
This 1985 horror film is loosely inspired by The Blob. A man discovers a sticky white substance deep inside a cave and, of course, decides to taste it. The stuff is sweet and addictive and eventually marketed and sold in pint containers like ice cream. But this isn’t another harmless food craze … the stuff is a parasitic, possibly sentient, organism that slowly takes over the brain of those who eat it, turning them into zombie-like creatures.

Garrett Morris
Born in New Orleans, Garrett Morris was one of the original cast members of the sketch comedy series, Saturday Night Live. He appeared on the show from 1975 to 1980. He actually has quite a genre background, appearing in such things as The Invisible Woman (1983), The Stuff (1985), Earth Angel (1991), Children of the Night (1991), Severed Ties (1992), Coneheads (1993), Black Scorpion (1995) and Black Scorpion II: Aftershock (1997), as well as episodes of The Twilight Zone, Scarecrow and Mrs. King, Happily Ever After: Fair Tales for Every Child and Good vs. Evil.

Bride of the Gorilla
This 1951 B-movie starred Raymond Burr, Lon Chaney Jr. and Barbara Payton. Burr plays a plantation manager in the South American jungle who kills his employer, marries the employer’s wife and is cursed by an old witch. Throughout the movie he slowly transforms into a a rampaging gorilla. It has the dubious distinction of being the first film ridiculed by Ed the Sock in the series This Movie Sucks!

The Wasp Woman
This 1959 Roger Corman film focuses on the aging founder of a large cosmetics company played by Susan Cabot. Research has shown that her diminishing youth is hurting sales of her product. So, when she hears from a slightly mad scientist that he’s discovered a youth serum derived from wasps, she quickly hires him. Impatient with the standard testing practices required for human testing of cosmetics, she takes the almost-perfected serum herself. At first, everyone notices remarkable results … but then the side effects begin to be uncovered. The serum turns those it was tested on — a cat in addition to Cabot — into wasp-like creatures with a thirst for blood.

Mystery Science Theater 3000 (MST3K)
This American cult TV comedy ran from 1988 to 1999. The premise is that a man and his robot sidekicks are trapped on a space station and forced to watch bad movies. To keep from going crazy, they poke fun at the films while watching. Joel Hodgson, who created the show, played the trapped man from 1988 to 1993. When he left the show, head writer Michael J. Nelson replaced him. The series won a Peabody Award in 1993, was nominated for two Emmy Awards (1994 and 1995), and was nominated for a CableACE Award.

Fire from Below
In this 2009 film, Kevin Sorbo (Hercules: The Legendary Journeys) plays geologist Jake Denning, who gets called in to save the day when a careless industrialist unearths a vein of pure base lithium and inadvertently brings it to the surface. When it comes into contact with water, the lithium combusts and wreaks havoc on the country side. There is even a town almost wiped out by lithium gas. Maeghan Albach and GiGi Erneta co-star.

David Tennant
This Scottish actor is probably best known to the genre community for playing the 10th incarnation of Doctor Who on the long-running BBC series of the same name. But he has other genre cred, as well: The Quartermass Experiment, Harry Potter and the Goblet of Fire, How to Train Your Dragon, Fright Night (2011) and episodes of Spine Chillers (2003) and The Sarah Jane Adventures (2007-2011). 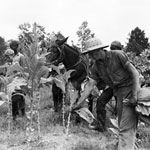 WWII, German POWs and Slave Labor
During the second World War, labor here in the States became scarce. So several companies made arrangements with the government to use German POWs to take up the slack. In November 1944, R.J. Reynolds arranged for 200 German POWs to work in its leaf houses. (Start wrote about his research on this topic at Research and The Strangest House in the World.) Also during that time, German POWs picked fruit for Bear Creek. 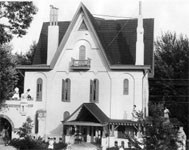 Korner’s Folly
Dubbed “the strangest house in the world,” Korner’s Folly in Kernersville, NC, was designed by Jule Korner. He was an interior designer who used each room to showcase his work … a 3D portfolio, so to speak. In addition to being an interesting looking place, Korner’s Folly is said to be haunted, as well.

Genre Writers in the Carolinas
Stuart mentioned several genre writers who call either North or South Carolina home. Among them are:

For more information about Stuart Jaffe: