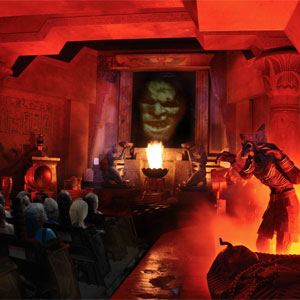 The third version of the “Revenge of the Mummy, The Ride” has now opened at Universal Studios Singapore. The first two versions can be found at the Hollywood and Orlando locations.

According to the press release announcing the opening on April 28, “Feedback from Singapore’s ‘Revenge of the Mummy’ riders has quickly put this attraction on the “A list” in blogs and other theme park websites.”

The ride was created by ITEC Entertainment, a worldwide provider of themed entertainment development services including theme park design, and combines a high adrenaline indoor coaster ride with show elements and special effects based on Universal Studios’ trilogy of “Mummy” films.

I’ve been on the ride in Hollywood and it was a lot of fun.

“This project has been an enormous undertaking and has overcome many obstacles,” said Jeff Jensen, ITEC’s Project Director, “but because of everyone’s hard work and dedication, the entire team can be proud of what has been created.”

Once you enter “Revenge of the Mummy, The Ride,” you will be treated to a variety of immersive experiences, including watching the soul of an unfortunate tomb raider being extracted from his body by the menacing Imhotep. ITEC’s creative and technical designers used cutting edge special effects and enhanced sound and lighting to make this among other scenes possible.