Fantasy Hotels Take You To Your Imagination

Home | Fantasy Hotels Take You To Your Imagination 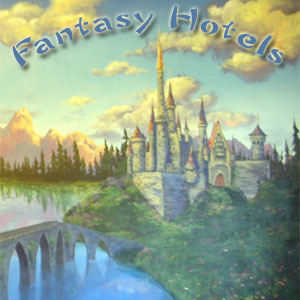 A few weeks ago, I saw this article on Yahoo! about the “World’s Weirdest Hotels” and a little later, I saw in an issue of Endless Vacation and article about “one-of-a-kind hotels. But what really drew me to these articles was that a lot of these hotels had genre themes.

Imagine going on a vacation where the very hotel you stayed in catered to your genre travel tastes? You could Captain Nemoy aboard the Nautilus. You could be James Bond from The Spy Who Loved Me. You could be the next Carl Sagan gazing at billions and billions of stars. You could even be a prince or princess living in your medieval castle.

Let me take you on that journey:

Berlin, Germany: Propeller Island City Lodge
This hotel has 30 rooms, each with it’s own unique ambiance. The first room built features a bed nestled inside a “gigantic, colourful wooden fortress, between dwellings harbouring both wardrobe and desk.” The room even has a miniature golf course in it! There is an upside down room, a room full of mirrors and a room where you can sleep inside coffins.

Da Lat, Vietnam: Hang Nga Guest House and Art Gallery
Feeling artsy? This hotel, which has earned the local nickname “Crazy House”, offers a very strange experience. Each guest room is built around a different animal theme and the buildings have some very genre-esque looks to them: one looks like a haunted tree, another like it was inspired by the house the Hansel and Gretel tried to eat.

Manuel Antonio National Park, Costa Rica: Hotel Costa Verde
This hotel reminded me of the TV series Lost. This hotel features a suite created from a salvaged 1965 Boeing 727-100 that once served South African Airways and Colombia’s Avianca Airlines. It just out from a cliff, making it look like it had crashed into the Costa Rican jungle (much like the plan that brought Mr. Echo’s brother to the Island).

Vlissingen, Holland: The Capsule Hotel
Want to sleep in something that looks like a flying saucer? You’ll want to check into The Capsule Hotel in either Vlissingen or The Hague. These 1970s-era escape pods were once hung outside oil rigs in case an evacuation was needed. Now they serve as place of respite away from the day-to-day world. Want to make it feel that more like genre travel? You can opt to book your pod with a disco ball and a bunch of spy movies on DVD. (Do not confuse these Danish capsule with the Japanese Capsule Hotel in Tokyo … a very different kind of experience.

Goreme, Turkey: Cappadocia Cave Suites
Want to sleep in a luxury cave? Well the Cappadocia Cave Suites have you covered. It’s 21 suites make use the the natural terrain of the Goreme Valley and sit inside ancient caves. 15 additional rooms are being developed and should be ready by mid-2010. The hotel’s websites promises, “All rooms incorporate original cave structures, cave bedrock, unique lighting, antiques and local handicrafts. No two rooms are alike, and the views from windows in all of the rooms are equally unique.”

Salar de Uyuni, Bolivia: Palacio de Sal
This hotel makes use of the natural resources found in the largest salt flat in the world … yep, you guessed it … salt. 28 salt-domed guestrooms branch off a central courtyard and instead of beds, mattresses sit atop chunks of salt. If you’ve ever driven through the salt flats outside Salt Lake City, Utah, then you now how other-worldly a salt flat can be. Besides, there aren’t many places you can look upon an alien-like landscape while dining on barbecued llama. 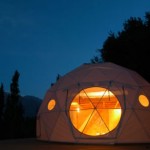 Elqui Valley, Chile: Elqui Domos Astro Lodge
Imagine gazing at the stars … unfettered by light pollution … while lying in your bed. You can do that at the Elqui Domos Astro Lodge, the upstairs bedroom has a detachable ceiling and comes with a telescope. Astronomy tours and nighttme horseback rides are available and your suites are geodesic dome tents. This is the life for stargazers!

7 comments on “Fantasy Hotels Take You To Your Imagination”