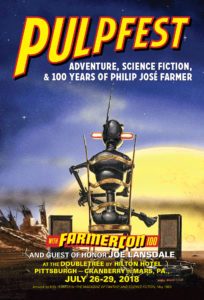 PulpFest is named for pulp magazines — fiction periodicals named after the cheap pulp paper on which they were printed. PulpFest 2018 will honor the 100th anniversary of the armistice that ended the First World War. The convention will focus on the so-called “war pulps” of the early twentieth century and the depiction of war in popular culture. We’ll also salute the centennial of the birth of Grand Master of Science Fiction Philip José Farmer. Join PulpFest 2018 and FarmerCon 100 for panels and presentations on the celebrated author of Tarzan Alive: A Definitive Bography of Lord Greystoke, Doc Savage: His Apocalyptic Life, the Riverworld and World of Tiers series, and many other works.

The convention’s guest of honor will be award-winning author Joe Lansdale. The author of over forty novels and many short stories, Lansdale has also written for comics, television, film, Internet sites, and more. His novella “Bubba Ho-Tep” was adapted to film by Don Coscarelli, starring Bruce Campbell and Ossie Davis. The film adaptation of his novel Cold In July was nominated for the Grand Jury Prize at the Sundance Film Festival, while the Sundance Channel has adapted his Hap & Leonard novels to television. Joe will be talking with Tony Davis on Saturday evening, July 28 and be available at select times during the convention.