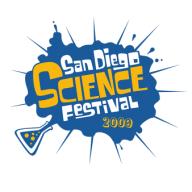 Planned as the West Coast’s largest science event, the San Diego Science Festival will let attendees watch a car drive itself (Knight Rider anyone?), race robots and experience the thrill of jet flight.

The festival is a grassroots collaboration of over 125 leading science organizations in San Diego and has attracted corporate and individual donors dedicated to encouraging the nation’s youth to pursue careers focused in science, research, and mathematics, including Lockheed Martin, which will be sharing hosting honors with San Diego Science Festival executive director Larry Bock.

To further enhance the authenticity and inspirational cachet of the program, the San Diego Science Festival has recruited astronaut Marsha S. Ivins, who has logged several orbital flights, to interact with Festival goers on April 3 and 4, as part of the Lockheed Martin Booth at the Aerospace Museum. An engineer in her early days at NASA, Ms. Ivins holds, among other licenses, a multi-engine Airline Transport Pilot License with Gulfstream-1 type rating, and has logged over 6,600 hours in civilian and NASA aircraft.

Lockheed Martin will be participating in the main San Diego Science Festival program with a multi-day event at the San Diego Air & Space Museum that will offer engaging hands-on exhibits for middle and high school students. Dubbed “On the Leading Edge of Science,” the exhibit opens its doors on April 1 as part of the Festival’s “Science on the Mesa” program. The interactive exhibit will be open to 200 high school students per day from April 1-3, concluding on April 4 – Expo Day – when it will be open from 10:30 a.m.-3:30 p.m.

As the event’s largest sponsor, Lockheed Martin will be contributing quite a bit to the event, including its authentic fighter jet Cockpit Simulator from Dallas/Ft. Worth, its VirtuSphere enhanced 3-D virtual reality training module from Ft. Knox, Kentucky, and its Prius Urban Challenge Vehicle from its facility in Cherry Hill, New Jersey.

The San Diego Science Festival is facilitated by a joint effort between Bock and BioBridge, a program of UC San Diego that reaches out to area schools to promote science education and research. For more information about the 2009 San Diego Science Festival, including schedule details, frequently asked questions, and comments from science community leaders, please visit www.sdsciencefestival.org.