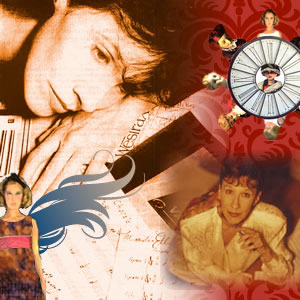 This week I chat with Mardi-Ellen Hill, creator of The Spell of Vaugirard, a one-time award-winning stage play, now a five-book series. During the podcast we discuss the plot of the play/series, how she grew a 2-hour stage play into a 5-novel series, musical influences, the interdependence of past, present and future, musical puzzles, and more.

NOTE: There was some issue with the quality of the sound. I did my best to get rid of the static.

Rue de Vaugirard
The longest road in Paris, it is a mostly one-way street from the Latin Quarter to the edge of Paris. The name “Vaugirard” came from an old French noun-and-genitive construction “val Girard,” which means “valley of Girard.” This is after an Abbé Girard, who owned the land over which the road passes.

DNA or deoxyribonucleic acid contains the genetic code and is found in the nucleus of the cell. It is a double helix, formed by two sugar-phosphate chains connected by the nucleic basis adenine, thymine, guanine and cytosine, twisted about each other.

RNA or ribonucleic acid has the job of transferring the genetic code from the DNA to the rest of the cell, and there is found in both the nucleus and the cytoplasm of the cell. It is a single strand of sugar-phosphate with the attached nucleic bases of adenine, guanine, cytosine and uracil.

Eugenics and Biometrics
Eugenics is the science of improving a human population by controlled breeding. It was first developed in the 19th century as a way to increase the occurrence of “desirable” heritable characteristics. It fell into disfavor after the perversion of its doctrines by the Nazis.

Biometrics is a branch of biology that uses statistical analysis to study biological phenomena and observations.

Invented in 1877 and introduced to the public in 1890 by the Edison Phonograph Toy Manufacturing Company, the first talking doll represented an historic step in phonograph history. This was because it was the first time a phonograph was marketed for home entertainment. The doll contained a six-second prerecorded cylinder that contained a six-second recording of a nursery rhyme.

Alas, there was no spring motor. So the child was expected to turn the crank by hand at a steady speed in order for the doll to recite the nursery rhyme. Later, Edison admitted that “the voices of the little monsters were exceedingly unpleasant to hear.”

Another drawback was that the delicate mechanism was too fragile for rough usage — a common occurrence when a child plays with a doll — and the steel stylus caused the wax record to wear out extremely rapidly.

Asperger’s Syndrome
The form of autism called Asperger’s syndrome is characterized by significant difficulties in social interaction, along with restricted and repetitive patterns of behavior and interests. It differs from other forms of autism by its relative preservation of linguistic and cognitive development. Although not required for diagnosis, physical clumsiness and atypical use of language are frequently reported.

For more information about Mardi-Ellen Hill: