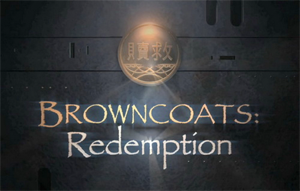 The producers of Browncoats: Redemption have announced that Ustream has sponsored the film’s premier today at 7pm Eastern. You can watch the film online at Ustream or the film’s Facebook page as it screens live at Dragon*Con.

Producer Steven Fisher approached Ustream in April looking for an innovative partner in online media to join the effort to raise $100,000 for each of five charities supported by the original cast and crew of Firefly.

â€œThey were the natural first choice,” direct Michael C. Dougherty said. “Ustream has empowered millions through their innovative platform. I was lucky to find they were also Browncoats.â€ (Note: Fans of Joss Wheedon’s Firefly universe call themselves Browncoats.)

Ustream has donated $40,0000 in bandwidth and several thousand dollars in development hours. The company will also be promoting the premiere broadly across its social channels. The stream will take place in conjunction with a live premiere at Dragon*Con in Atlanta, Georgia.

Browncoats: Redemption is a feature-length, fan-made sequel to Joss Whedon’s film Serenity, itself a sequel to the short-lived TV series Firefly. The film is using a unique nonprofit model, leveraging modern day crowd sourcing and high-end independent production to create a feature length film with the blessing of the original director, Joss Whedon. All donations received from the DVD go to the following five charities supported by original cast and crew members of Firefly/Serenity:

â€œWith the premiere powered by Ustream,” said Dougherty, “the five charities we are supporting will gain awareness and donations at a level we never could have reached on our own.â€

Browncoats: Redemption takes place three months after the events at the end of the Universal film, Serenity. Exposed for transgressing against the entire universe, the Alliance hone in on a small transport crew on which to place the blame. We find Captain Laura Matthews and the crew of Redemption unintentionally thrown into a situation that some view as the potential catalyst for the second unified rise of the Independents against the Alliance since Unification Day.

I’ve already recorded a fun interview with Dougherty and Heather Fagen, who plays Captain Matthews. The podcast is currently scheduled to post on October 1.

The production has already raised more than $6,000 for these groups at events and conventions. With a goal of 32,000 DVD orders, the producers hope to disperse another $100,000 to each organization at absolutely no cost to the charities.

1 comment on “Fan-Created Serenity Sequel to “Air” on Ustream Today!”