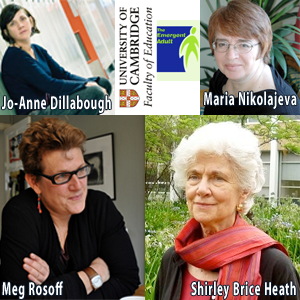 A three-day conference, The Emergent Adult – Adolescent Literature and Culture, at Cambridge University is going to explore the effect on the teenage brain of books like Twilight and the Harry Potter series.

Scientists, authors and education experts will all gather to discuss whether there are â€˜Twilight zonesâ€™ in the teenage mind; areas of the brain in some way affected or altered by the reading of books like the wildly-popular vampire novels of Stephanie Meyer, author of the Twilight series now being made into films.

The three-day conference, starting today and lasting through he weekend, will make connections between recent neuroscience research and the representation of the adolescent in literature, film, computer games and social networking sites.

â€œWe are bringing together people from different disciplines from all over the world to look at the physiological, psychological, chemical and sociological effects of reading teenage fiction,” said organizer Professor Maria Nikolajeva, the first director of the Cambridge/Homerton Research and Training Centre for Childrenâ€™s Literature, dedicated to studying childrenâ€™s media. â€œResearch is going on not just [at Cambridge] but around the world into neuroscience and literature; how the teenage brain responds to narrative in the printed word, computer games, media and social media.”

One question the conference will address, says Nikolajeva, is “Do we want young people to go on reading? Does it matter?â€ I know what I think on the matter, but we’ll have to wait for what these scientific minds come up with. (Note: I’ll try to get Nikolajeva as a guest on the podcast.)

The conference is one of the first of its kind and includes keynote addresses from author Meg Rosoff and the hugely respected American linguistic anthropologist Shirley Brice Heath.

Sessions at the conference include “What is it about good girls and vampires?”, “My life would suck without you” and also a session looking at how gay teenagers are portrayed in young adult literature.

â€œWe can absolutely say that all these different forms of entertainment for teenagers have values,” adds Nikolajeva. “There is evidence, for example, that library use increases among teenagers the day after a popular film comes out.”

Nikolajeva said that the current trend for darkness and dystopia in childrenâ€™s literature, prevalent in books such as Suzanne Collinsâ€™ The Hunger Games, reflected concerns in the wider, adult world.

And this begs the question, at least for me, if dystopian fiction is such a concern, then why were Aldous Huxley’s Brave New World, Pat Frank’s Alas Babylon and George Orwell’s 1984 required reading when I was a teenager? Each portray a very dark future, some quite hopeless.

â€œSome of these books are huge phenomena,” says Nikolajeva. “What is happening in the teenage brain when they read books like Twilight that invite fear and abhorrent emotional responses?â€

Nikolajeva acknowledges that â€œThese trends come in waves. A hundred years ago it was about boys having adventures and girls finding husbands. From the 1950s to the 1970s we had emerging sexuality and parent conflict.

â€œNow, the situation in the world makes us anxious. Weâ€™ve had things like 9/11 and global warming. There is fear and disaster. Since the turn of the millennium this has been a tangible trend which is interesting â€“ and disturbing.â€

Nikolajeva warned that childrenâ€™s authors carry a huge weight of responsibility on their shoulders, especially with contemporary predilections for ever darker fiction. “There is a social responsibility that goes with this.”

She said that because the teenage brain is going through so many changes and is, in effect, unstable, childrenâ€™s authors, film-makers and game developers have a moral responsibility to make sure there remains some element of hope and positive ethics within their work.

â€œTeenagers cannot really make decisions in the same way adults can,” Nikolajeva says. “Synapses in their brains are breaking and reforming and the chemistry of the brain is changing.â€

This unique conference is a first of its kind and quite interdisciplinary. “Hopefully we might be able to find out a little more about what is going on inside the teenage mind,â€ Nikolajeva said.