A month or so back, I was running out of things to watch on Tivo, so I went searching. I kept seeing this show ReGenesis pop up, but thought it had to do with the series of movie Reanimator, so I ignored it. But after seeing so many times, I clicked on the name and discovered it was a genetics-bases sci fi thriller. So I recorded an episode.

Turns out I recorded episode number 2 … and I was hooked!

For the past few months, the first season of ReGenesis has been re-airing in the wee hours of Sunday morning on a local channel, KPHO, so I usually end up watching it during breakfast on Sunday morning. 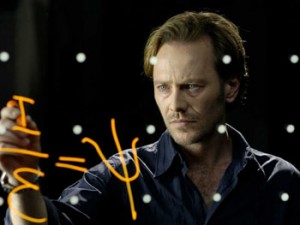 Set in Toronto, the series follows geneticist David Sandstrom and his expert team of virologists and microbiologists from around the world. Dr. Sandstrom is played by Peter Outerbridge, a fairly recognizable face to the genre fan, having popped up in Fringe, Sanctuary, Flashpoint and Saw VI — and that’s only in the last couple of years. In fact, I wrote a review of the “Folding Man,” the episode of Sanctuary his was in, for Airlock Alpha and mentioned what a fine job I thought he’d done.

And, I have to admit, Outerbridge is what truly makes this show. You see Dr. Sandstrom may be a brilliant scientist, but he is a flawed man. In the first episode his daughter arrives unexpectedly and catches him having sex with Twyla, his physiotherapist. Within minutes, he leaves Twyla and his daughter, Lily, alone to go to work … a mysterious illness is heading its way to Toronto and his newly formed lab, NorBAC, has been called in to investigate.

As the season moves on, you learn that Sandstrom is arrogant, ornery and likes to sleep around. He drinks too much and probably has ADD (self-medication with such behaviors is common in people with ADD). However, despite having to deal with his personality “quirks,” his team is fiercely loyal to him. Remember, he’s brilliant. They all joined the team to work with the best.

Of course, Sandstrom isn’t the only character with quirks. Bob Melnikov has Asperger’s Syndrome, Caroline Morrison doesn’t mind using her feminine wiles to gain access to restricted information and Jill Langston suffers from panic attacks. Oh, and then there’s the virologist who might have ties to a terrorist cell in Pakistan, the suit who has AIDS he got from a European prostitute and others. This show has a knack for developing three-dimensional characters.

The show is shot with the washed out blues I’ve found common in the genre shows I’ve seen shot in Canada, and uses multi-image sequences at times to convey depth of message. Sometimes, they’ll even rewind a scene so you can see it unfold from a different character’s perspective. Oh, and I love the music, lots of Middle Eastern drums and strings, with a touch of techno beat. It underscores the International flavor of the show … three countries cooperated to fund NorBAC.

ReGenesis is intelligent and entertaining, maintaining a lovely balance between science-based mystery and character-based drama, with some government intrigue and bio-terrorist thriller thrown in. While researching this post, I discovered the first season is now available on DVD. I highly recommend you catch this on the TV or grab a copy of the DVD. I’m already, re-watching the first season … it’s that good.

The cast is rounded out with an eclectic mix of multi-cultural actors, again supporting the International nature of NorBAC.

Mayko Nguyen plays Mayko Tran, the microbiology number cruncher. If there is a pattern in the genetic data, Mayko will probably find it. Genre fans might recognize her from an episode of The Listener or Princess: A Modern Fairytale.

Conrad Pla portrays Carlos Serrano with calmness and depth. An expert in genetic diseases from Mexico City, Carlos in many ways is the yin to Sandstrom’s yang. They often bounce their theories off each other, eventually coming up with the right one. Previous genre sightings of Conrad include Eternal, Mutant X (TV series), Lathe of Heaven and Relic Hunter (TV series).

Dmitry Chepovetsky plays Bob Melnikov, the lovable and brilliant lab tech who has Asperger’s Syndrome. He has a golden retriever called Gama, who has a story line that tore at my heart (especially in light of my dog of 14 years passing). Bob has an amazing nose for frangrances and almost leaves the lab for a job as head of a perfume lab.

Maxim Roy plays the admistrator of the lab, Caroline Morrison. She is smart, driven and not above using her sexuality to help solve the latest genetic mystery … because, of course, government secrets are often involved. If you’ve been watching Defying Gravity, you’ll recognize Maxim … she plays Claire Dereux, the doc who is involved with the ship’s doc on the Antares.

Another familiar genre face, Sarah Strange, takes over the role of virologist when the original virologist, Hira Khan (Mishu Vellani) is shot. Sarah has popped up in a lot of genre shows, including The X Files, Sliders, Millennium, First Wave, The Outer Limits (1995, 1996 & 1998), Welcome to Paradox, Viper, Poltergeist: The Legacy, Level 9, Dark Angel, The Twilight Zone (2002), Stargate SG-1 and Sactuary, as well as a few genre movies, Hideaway, Deadlocked: Escape from Zone 14, The Adventures of Captain Zoom in Outer Space and White Noise. Her character, Jill Langston, is a gifted virologist who has spent most of her career research the 1918 Spanish Flu virus.

Although I could only find one genre film set in Toronto, David Cronenberg’s Videodrome, the list of films and TV Shows shot there is long. Toronto has a fairly robust film industry, as does Vancouver, where Damien Kindler’s Sanctuary is filmed.

If you’re traveling to Toronto and want to check out some genre film locations, these resources may help:

10 Most Popular Locations for Film and Television in Toronto
In particular, you’ll want to check out New City Hall, which was used to represent the Umbrella CorpÃ¢â‚¬â„¢s main buildings in Resident Evil: Apocalypse, and Casa Loma, which played double for XavierÃ¢â‚¬â„¢s School for the Gifted in X Men.

NOTE: This week’s video is of the very cool opening credits.