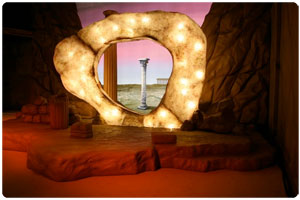 After a brief showing in my neck of the woods (Phoenix, AZ), Star Trek: The Exhibition is now showing at the Detroit Science Center and will be there through Sept.7, 2009. Created by Premier Exhibitions, ST:TE “transports visitors into parallel universes of the future and past,” at least according the Premier Exhibitions.

The exhibit features 200 authentic objects from this groundbreaking television and motion picture series, which got its start the same year I did. 1966 was a good year! (The Superbowl began that year, and The Monkees TV series also premiered.) Throughout the exhibit, visitors can connect with iconic Star Trek moments and characters while celebrating the creative spirit of science fiction that gave rise to many of today’s modern marvels.

The exhibit opened on Valentine’s day with a competition for couples. The winning duo will receive a June wedding to be held in the exhibit, reception space at the Detroit Science Center for 200 guests, two nightÃ¢â‚¬â„¢s accommodations for the wedding couple at the Star Trek Suite at the MGM Grand Detroit Hotel and Casino, and other Star Trek wedding surprises. Voting ends March 16, 2009 at 5 p.m. ET. If you’d like a vicarious thrill, go vote for your favorite couple on Facebook.

The multi-city touring exhibition contains the worldÃ¢â‚¬â„¢s most comprehensive collection of authentic Star Trek ships, set re-creations, costumes and props from 5 television series and 10 films over the last 43 years. Highlights include:

There is also a story about the exhibit at AmericaJR.com.

5 comments on “Star Trek: The Exhibition now in Detroit”